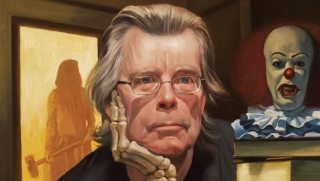 Thanks for granting us this interview. Thanks for giving us the time. Thanks for signing the waiver. Why don’t we start with: You used to write about what was happening in the world – why did you stop doing that?

To get at the heart of the matter.

That’s where the heart of the matter is.

We’re off to a bad start here. We paid you a good chunk of money to do this interview, we deserve better answers.

Then ask better questions. Or use the waiver. With the waiver you can leave out anything I say and pepper the whole thing with asterisks and hire a ghost writer to smooth out the rough spots.

Cheaper than a ghost writer.

We’re not talking about the same thing.

How does your decline in popularity make you feel? Your overnight plunge from a New York penthouse into a walk-up flat in the Bronx? Tom Wolfe says it’s a pity, you showed promise.

What? When did you start doing that? What language?

The language of the heart.

Let’s get back to what you used to write about – your screwed up family and demented friends. People ate that up.

They grew wings and flew into the sun. They burn brighter than ever. Read between the lines. Read my latest novel, Burnt Wings & Withered Prayers: Meltdown on the Psych Ward.

Which sold 600 copies and got remaindered after six months.

Time to come at things from a different angel.

Why won’t you give people what they want? They’re hungry for the old you.

Okay, let’s take a different tack. Let’s talk about what you’re working on now. The scuttlebutt has it that you’re collaborating with Stephen King.

Steve and I play checkers on Friday nights.

No one calls Stephen King Steve.

No one plays checkers with him. And we play hopscotch, too. In Steve’s driveway on weekends. And we work crossword puzzles together high on acid. Steve is my last connection with the linear world. From here on out it’s all 3-D.

Is it true you’re planning to move to Prague? Aren’t you on the No-Fly List?

There’s more than one way to skin a cat. Or get to Prague. And yes, it’s true. I met a woman in New York who is a torch singer in a Prague nightclub. She’s going to support me while I work on my new novel, which takes place inside an anthill and is 90% punctuation. It’s a stylistic breakthru. No working title yet.

We can’t use this. We can’t use any of it. Except maybe the stuff about Steve. I mean Stephen. Mr. King. Is it true? We don’t need a lawsuit.

How about an Armani?

Do you even know Steve? Stephen?

We met playing checkers in detox.

We got released on the same day. Steve had a limo waiting. He gave me a lift, dropped me off in Soho.

We need to wrap this up.

Go for it. Use string, masking tape, butcher paper – whatever it takes.

Do you have a closing statement?

My life is an open book.

Fine. Great. Do you want my secretary to call you a cab?

If it turns her on, she can call me a cab.

Fuck you, man. I know that’s not a very professional thing to say, but fuck you. You can ride the bus.

You’re either on the bus or in a cab, I said, and he said,

Get him out of here…