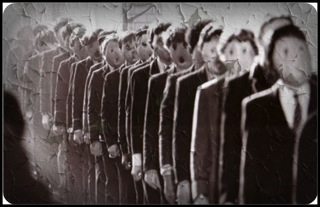 The N word is a No-No. No, Know’s not the N word. Know starts with a K and that’s OK. But stay on your toes–two more Ks make it KKK, and out come the sheets, burning crosses and lynchings. But Ks in moderation are acceptable to the NFC.

The NFC is an acronym for a literary ethics committee. I’d be more specific, but it’s forbidden to speak or spell the words NFC stands for.

The NFC is not unreasonable. They make ample suggestions for substitutes for offensive words. African American and person of color are healthy substitutes for the N word. For the F word one can substitute Fudge or, in an extremely agitated state, Friggin; although you’re walking on thin ice if you begin using Friggin chronically. And there are ample substitutes for the C word: woman, lady, young lady, girl, person of the female gender, etc. The NFC is funded by the NEA (National Endowment for the Arts) and a host of tax-exempt corporations.

There is much work to be done to purge the American vocabulary of offensive words. The N,F and C words are just the tip of the iceberg. A sub-committee has been established, and its task is daunting: to comb through all the books written in America since the Declaration of Independence and identify offensive words.

There’s nothing that can be done about editions of books already in print, except, perhaps, down the line (after new standards have been firmly established), conduct door to door confiscation searches; but considerable financial and political pressure can be brought upon publishers to–in future editions of such books–replace offensive words with NFC-approved substitutes. There is another sub-committee whose sole task is to compile substitute lists.

For books used in public schools, the substitutions are fast becoming mandatory. The books of Mark Twain are the #1 offenders, but there are plenty of other books that during the Era of Denial had been considered classics; the majority of them were written by southern authors, such as Carson McCullers, Thomas Wolfe, William Faulkner and William Styron.

The NFC is not inflexible. African Americans, for instance, are permitted to use the N word in a proper cultural context, although Hispanics may not use the S word for reasons too complex to go into here. Junot Diaz has come under close scrutiny not only for use of the S word but also liberal use of the N and the F words and a long list of others. His novel The Brief Wondrous Life of Oscar Wao is so riddled with offensive words that the Committee for Substitution gave up trying to correct them all and made a strong recommendation that the book be declared irredeemably obscene and banned in school districts and libraries throughout the country.

If you cannot for the world of you think what the S word is, do not grow despondent. This is a strong indication that you possess a healthy vocabulary, and you might want to consider a career as a writer.