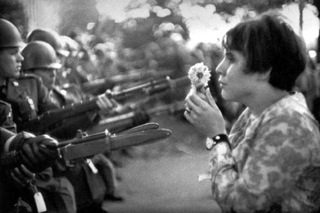 People talking war. People talking carnage. People talking the abstraction of distant suffering. You don’t know what six German riot police are until they kick in your door, and then they’re not German, they’re not even riot police, they’re six men with license. From the moment the door splinters off its hinges and your wife starts screaming with her hands over her ears and the two English vagrants you’ve been harboring make a dash for the window, generalities and abstractions and speculations get vaporized and life explodes into a shower of micro-seconds.

The Pentagon March, 1967. Face-to-face with a row of bayoneted rifles and gas masks with 19-year-old boys behind them. A girl sticks a rose down a barrel, someone barks a command, and the boys move forward in the short-thrust position. Someone grabs a rifle, someone gives a shove, Norman Mailer has come and gone, Dick Gregory has been rushed to the hospital at the tail end of his protest fast, and then they fire the tear gas.

Things shatter into myriad particulars. You and Grant slide down a hillside and come face to mask with a soldier who is pointing his bayonet at you, and you’re thinking not about the war or justice or equal rights but that this kid doesn’t know Grant. You’ve been here with him before, in New Orleans, on the streets of Brussels, this has nothing to do with McNamara or Mailer, with the Nam, this is personal, and like a swift jungle cat Grant wrenches the rifle out the the boy’s hands, flings it aside, and rips off the mask.

The kid is scared and has no idea what he’s doing. “I’m sorry,” he says, choking on the gas, and–eyes stinging and throats burning–Grant and I laugh. Grant gives the kid a bear hug and we haul ass out of there.

I’m parked in my work van up on the hill at 6 a.m., the only vehicle up here, the window rolled down to let in the fresh morning air,drinking coffee and smoking and writing this, when a low rider pulls up alongside me.

The tinted window goes down and a black chick says, “You got a cigarette?”

There’s an Arab-looking guy with a gold chain around his neck behind the wheel, and a blond in the back with plucked eyebrows. The four of us are taking readings like crazy.

The window goes up and the low rider backs slowly in behind me.

I keep writing. I write what just happened and then I study the low rider in the rear-view mirror. I get out of the van and walk back there. The passenger-side window comes down about halfway and I walk around and hold out a cigarette. This isn’t in the script, and that gives me the upper hand.

“I don’t smoke rollies,” says the black chick, but when I continue to hold it out, she takes it, reluctantly. “Do you smoke rollies?” she says to the girl in the back.

“I’ll smoke it,” the girl says, and the black chick hands it back. The girl twists one end of the cigarette like it’s a joint and I hand in a lighter.

The Arab-looking guy has both hands on the wheel and is looking straight out the windshield.

The girl in back lights up, leans forward, and hands the lighter back out. “Thanks,” she says.

I’ve got all the information I need to rest easy.

Years ago, in San Francisco, me and my friend Glenn, whose whole life is an abstraction, were driving down a deserted street off Broadway around midnight after a night of drinking, when a woman sprang out from behind a hedge and came running toward the car, waving her hands frantically.

Glenn stopped, put the car in park, and with the motor still running, got out. I took one look at the woman, the way she was dressed, the way her eyes didn’t match her arm waving, and my eyes began darting around. Sure enough, here’s this guy coming around the other end of the hedge, one arm stiff at his side, a pistol in his hand.

“She needs help!” Glenn says. He still hasn’t seen the man with the pistol.

Glenn freezes in place, his eyes glazed–he was rolled in the Fillmore just a week earlier. I reach out, yank him back behind the wheel, put the car in gear, get my foot on the gas and floor it. We go careening down the street, Glenn steering reflexively.

I twist around and look out the rear window. The man and woman are standing side-by-side in the middle of the street, the woman with her hands on her hips, the man with his arm still stiff at his side, holding the pistol.

If you’ve spent any time on the street, all this makes sense to you.

The street is where things get processed at lightning speed.

The street is a state of mind.

People who don’t know the street are fair game, and they get what they deserve.