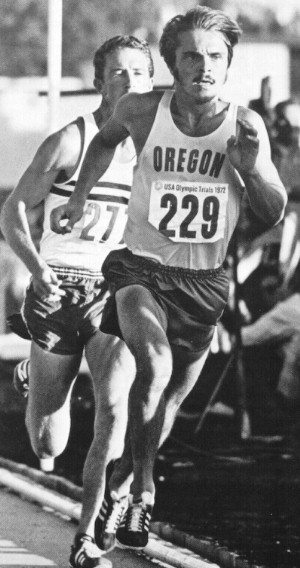 Vengeance is mine. So is a six-foot-long claw-foot bathtub and a manual lawnmower. I’m a rich man indeed. I have a tea pot and a frying pan and 67 clothespins. A faded black-and-white photo of me leading George Young thru the first lap in a mile race at the Fort Belvoir Second Army track meet. We were young then, George and me, with young aspirations. George was off to the Olympics and I was on my way to a missile detachment in Holland.

In Holland I had a Czech motorcycle and the love of a Gypsy girl. I don’t know how things turned out for George at the Olympics; I lost interest in the miracle mile when he went tearing past me on the second lap, and I immersed myself in Gypsy love and Dutch beer. I took an overseas discharge and slipped away into Europe.

I had a hard time acquiring things and holding on to them after that. I lost my Gypsy girl and wound up with a German girl but lost her too. I hung on tight to the beer. I drank half the beer in Germany before sailing back to America.

I wound up running a magazine out of a steamer trunk, bouncing from place to place – Munich, D.C., New Orleans, San Francisco. I could slam that trunk shut and be out of town in less than an hour, any town.

I’ve settled down now, except in my head. Things are still pretty wild up there. I live in a cottage with a clothesline out back where I keep the 67 clothespins. The steamer trunk is long gone. Brown University paid hard cash for it when I was at a low financial ebb. Today I’m down to buckets and squeegees, a computer and a shelf of books that I’ve written. And the clothespins.

Right now it’s sunset, Saturday, and I’m parked in my work van on a hill overlooking this valley I wound up in. The hill and the valley are mine, even though some people would beg to differ. There are people buzzing all over the hill as I write, wading through the juniper, taking pictures of themselves with their smart phones and jabbering away like monkeys.

That’s my life in a nutshell, and George Young is nowhere in sight as the gun fires and I turn into the final lap.