a writer talks about his trade 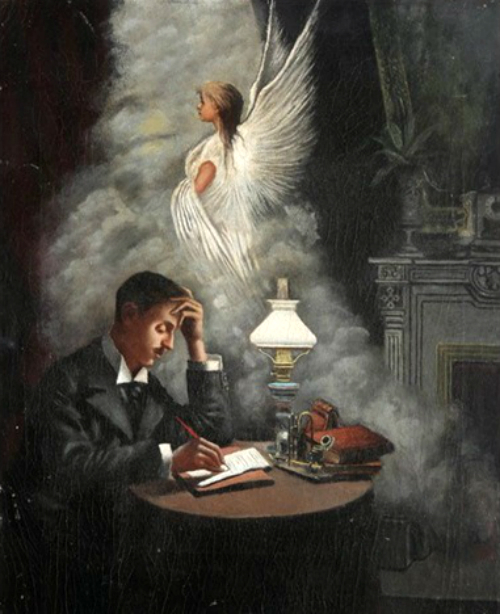 A WRITER TALKS ABOUT HIS TRADE

He thinks he’s figured it out, why he writes Shards. He thinks they’re what took the place of letters. Not just any letters, but those red-hot epistles of youth, longhand scrawls on lined paper. But then his pen pals died off or lost their pazam, and there he was walking the streets mumbling to himself–not a good thing; not a safe thing; the sort of thing that draws scrutiny.

But he may be mistaken, who knows for what–a giraffe, a carafe, a nut case bombarded with erratic thought. He–damn, he’s taking over again, the scribe, I can hardly get a word in edgewise before he shoulders his way to the front. Sometimes I wonder who’s running this show. Sometimes we pass each other in the dark house when I get up at night to take a piss and he brushes by me without a word, off to who knows where. He never sleeps. At times I’ve harbored the secret wish to see him gone, but all that’s ever done is trigger a barrage of poems, a short story or two, or a drunken rant. He used to drink like there was no tomorrow, but when he caught me hoping he’d drink himself to death, he stopped cold.

To tell the truth, he sometimes scares me. Just look what he’s done to this attempt to write something scholarly–butchered it; mocked it; ripped it to shreds. He’s been doing this sort of thing for as long as I can remember. When Bukowski wrote me back in the Seventies and said writing about writing was the worst hot dog in the pot, he nearly split a gut laughing. Then he slammed down the last beer in the refrigerator, got on his motorcycle, and went racing across San Francisco in his oily torn jeans and his fatigue army jacket, his ponytail flying in the night wind. He went down to a Valentia Street bar and wound up getting thrown out by a big bartender named Swede. I woke up after that one late for work with a hangover that lasted three days. He’s never once paid the price for anything he’s done.

Just the other day he said he doesn’t take kindly to my putting words in his mouth. Just now, looking over my shoulder, he said that I’m in way over my head, talking about where Shards come from. He says if he didn’t have to go thru me to get to the words he could really go places, places where no man has gone before.

“Do you like that?” he says. “I knew you would. You’re a sucker for herd-mentality catch phrases–remember when you were calling me J. Bennett Jr.? Holy shit!”

“It’s good that we’re discussing things,” I say, hoping for a reconciliation.”

He doesn’t answer. He lights another cigarette and studies me like I’m something in a jar of formaldehyde.

A chill runs up my spine, and I catch a glimpse of something that one day will kill me.

Tagged as A WRITER TALKS ABOUT HIS TRADE, John Bennett, Poetry, shards