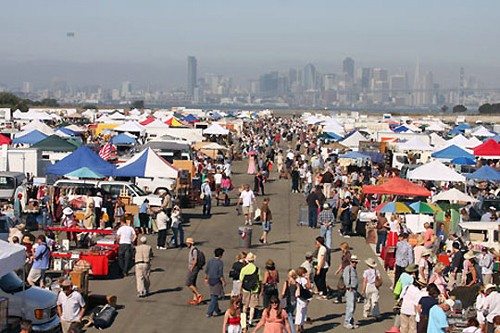 Laminated dreams and sauce pans were hot items at the San Francisco flea market on this particular Saturday. Right up there with amputated digits and cauterized wounds. No one was buying potted plants or vibrators. No one even tried to sell homemade cookies.

It was a puzzler. A real head-scratcher. The talk of the town. Over drinks in fashionable restaurants fashionable people discussed what it might mean–for the culture, the country, the future. Young computer geeks with twisted sex lives attempted to create complex programs to analyze the raw data of the phenomenon, and their computers crashed in the process. Which generated a wave of alarm–these were the same boys who made breaking thru the Pentagon’s firewall seem like child’s play.

A masked Ninja dressed in black and sporting a samurai sword showed up at the flea market the following Saturday. He decapitated the offending vendors, then covered their ware tables with black silk that inexplicably burst into flame and brought in the fire brigade. Once the fire had been extinguished there was nothing left but a gaping hole in the ground filled with green vapor.

The Saturday after that the decapitated vendors showed up as if nothing had happened, and when interviewed, they claimed to have no idea what the media was talking about. Here they were, weren’t they, heads firmly in place and ready to sell? After that the sale of sauce pans fell off, but the rest of it, especially the laminated dreams, skyrocketed.

It was a quantum leap phenomenon, some sort of hundredth monkey thing, something that struck down the entire digital world and shriveled up cyberspace. Computer sales came to a standstill, and gradually the streets began to empty and people stopped showing up for work. And no one was buying groceries, people seemed to be existing without the need to eat or call each other on their cell phones or even text.

The President went on national television and called it a glitch. “There’s a glitch in the System,” he said, “but there’ve been glitches before, and we always pull together and work around them, because that’s what America is all about.”

But no one was watching the broadcast except the President, looking back at himself on the studio monitor, clearing his throat now and then and glancing down at his notes.