and the winner is… 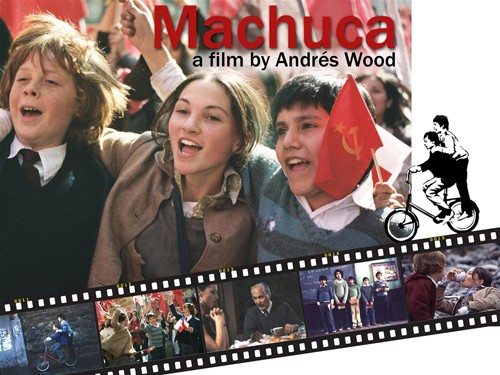 And the Winner Is …

I watched the movie Machuca last night on DVD over a supper of leftovers. A 2005 Chilean production about a precarious friendship between a peasant Indian boy and a freckle-faced rich kid at the time of Allende’s downfall and suicide. At least that was the deduction of the CIA-backed junta that seized power after Allende’s death–they supposedly found him with a bullet in his head and a pistol in his hand.

End of friendship. The rich kid went on being a rich kid and the shanty town where the Indian boy lived was razed by the military; most of the men were shot, the women worth raping were raped, and who knows where the children wound up. Standard procedure for a CIA-backed regime change in the Third World.

I only mention this because of this year’s Academy Awards which I watched because some friends invited me over and the invitation included supper. A supper invite is hard to pass up when you’ve been batching it for fifteen years. I showed up late and walked in in the middle of Seth MacFarlane singing his lungs out about the boobs of half the actresses in Hollywood.

Another stab at humor came when MacFarlane gave a sock-puppet rendition of Flight, after which he weighed the merit of various actors who portrayed Lincoln over the years and concluded that it was John Wilkes Booth who really got into Lincoln’s head. Then someone ripped open another envelope and announced another winner.

Jennifer Lawrence fell flat on her face going up the steps to receive her Oscar, Daniel Day-Lewis graciously received the third best-actor Oscar of his career, and various behind-the-scenes individuals, not used to receiving recognition leave alone an Oscar, got carried away and couldn’t stop talking; they had to be drummed off stage by the theme music from Jaws, escalating in volume the longer they went on.

And then it was best-picture time.

Lincoln could have won but didn’t.

Silver Linings Playbook was out, too full of good cheer and no special effects.

Beasts of the Southern Wild didn’t have a snowball’s chance in hell, championing as it did people who live lives of simple dignity and savage joy while thumbing their noses at the mainstream matrix most of the rest of us are ensnared in.

Django Unchained was a bit too racial with Uncle Tom undertones and a terrible movie anyway, bloated with gratuitous Tarantino violence.

Amour was a foreign film in a foreign language, for God’s sake, how did it even get nominated?

Life of Pi pivots on a vague spiritual premise, and vague spirituality mixed in with a tiger on a raft in the middle of the ocean was a little over the top for the Academy.

Zero Dark Thirty shot itself in the foot with all the political controversy it aroused, which leaves us with Argo.

Argo has the same theme as Zero Dark Thirty, a theme that’s been packaged and repackaged ad nauseum since 9/11–Americans wronged, Americans threatened by some dark foreign force, and American ingenuity to the rescue. The same message, but carried by events cooled by time; the fact that CIA hanky-pank helped trigger the Iran hostage situation didn’t figure into the script.

Argo was a shoo-in, a blind man could have seen it coming. But what a blind man couldn’t have seen coming was who ripped open the envelope and announced the award. Not an actor or a Hollywood luminary but none other than Michelle Obama, the First Lady of the Land, coming straight from the White House on video feed with a phalanx of uniformed military men and women standing at attention behind her.

Zero Dark Thirty may not have won the Oscar, but the message Zero Dark Thirty delivered was validated by having Michelle Obama announce Argo as best picture. Seth MacFarlane’s goofball humor evaporated, and a chill went down my spine.

But not down the spine of Rolling Stone, apparently, where it was noted that the “ratings” for this year’s Academy Award presentations were the highest since 2007, and this had a lot to do with the fact that six of this year’s Best Picture nominees had to date each grossed in excess of 100 million dollars, a sophisticated financial statistic the significance of which would have been lost on the peasant boy in Machuca.

Tagged as And the Winner Is ..., John Bennett, Machuca, Poetry