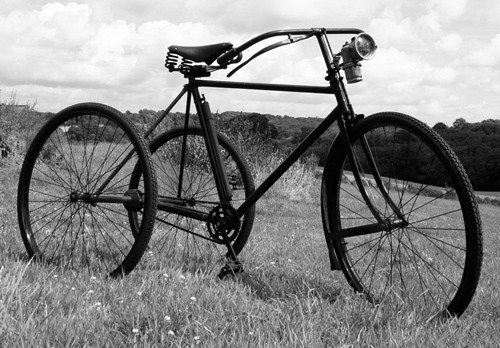 Double tall mochas. Triple apple-cider delights. Banana splits stuffed with cherry bombs. They go off in your mouth and blow your new dentures to smithereens.

This is what happens when the More Syndrome escalates out of control. You’ll sacrifice your first born and your illegal immigrant house maid for your next fix. You’ll trade in your Mazda for a tricycle and pedal down the freeway to get to your dealer’s house.

It sounds dangerous, but it’s not. There’s nothing but tricycles on the freeway these days, and the occasional Moped. Everyone is trading down, full-grown men pedaling across town on tricycles, their knees up around their ears with every turn of the pedals.

A law had to be passed to allow tricycles on the freeway. The mayor pulled up at the press conference to make the announcement on his tricycle, larger than most, the deluxe model. He apologized for being late, but the street traffic was heavy and the Freeway Tricycle Law wouldn’t go into effect until midnight.

Only the Hell’s Angels opposed the Freeway Tricycle Law, going against the grain as usual. They took to racing up the freeway against traffic in wedge formation, knocking upstanding citizens off their tricycles with baseball bats. The National Guard had to be deployed in helicopters, apprehending the Angels by flying low and scooping them up in metal-mesh nets.

Quite a few citizens on tricycles got caught up in the nets along with the Angels, and some of them were seriously injured, but it was a price that had to be paid if law-and-order was to be restored.