what goes around does not go in a straight line 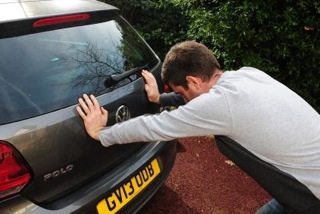 What Goes Around Does Not Go in a Straight Line

Context under stress. The moan of escapism. The florid fast shuffle. A bright burst of the unspeakable, the abrupt death of certainty. I’m up on the hill and the van won’t start.

I fantasize climbing up on the van’s roof and crying out, “You’ll never take me alive!” as three sheriff’s deputies, a mental-health orderly and a dog catcher close in on me. Then I ponder other options.

If this were a stick shift, a stick shift being a vehicle with a clutch, a clutch being a foot pedal to the left of the brake pedal that can be engaged to shift transmission gears, I’d put the transmission in neutral, jump out and push the van to get it rolling down the hill, jump back in and engage the clutch, put the transmission in second gear, disengage the clutch when the van reaches twenty miles an hour, and presto! The engine would kick over and I’d drive home. I’d feed the turtle and the turtle dove and the shy python in the spare room, cook up a little grub, put on my slippers and sit down to write a letter to a good friend down in Sacramento who recently sent me a letter written with pen and ink. Among other things he says:

“I have given up on computers. I’m returning to writing letters with pen and ink…”

“AT&T turned off my phone…”

There is a force beyond the Higgs particle the holds imagination together. They will never find it in their digital universe.

But now the moment of truth is at hand. It’s time to turn the key in the ignition and see what direction my life will take.

Tagged as John Bennett, Poetry, shards, What Goes Around Does Not Go in a Straight Line