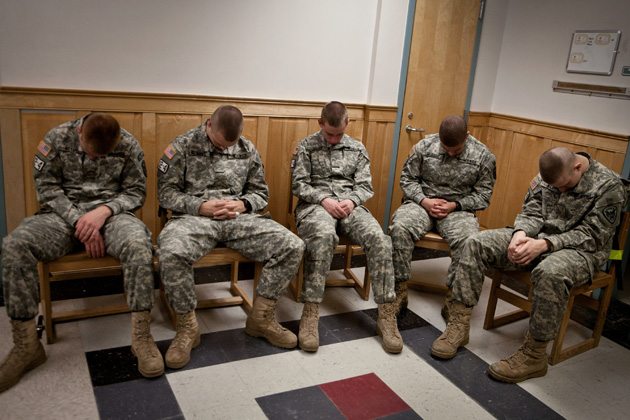 I served my country. Fought the good fight. “Can do, sir! No excuse, sir! Put me in, sir!” Lock and load and open fire. No child left behind, draft the lot of them.

So now I qualify for V.A. medical. Last time in my doctor apologized for not catching the aneurysms a that civilian doctors did the slice and dice on. I told him not to sweat it, he has enough on his mind, and anyhow, how is he supposed to detect an aneurysm from a man’s blood pressure and pulse rate in an annual check up? Hell, nine times out of ten they miss them with a CAT scan.

I like my V.A. doctor. He’s a P.A., actually, a Physician’s Assistant. He was special forces, dropped out and went to med school. He’s a young wired black belt who reads books. When I went in for my initiation into the system he was passing by as the in-take nurse weighed me in, and he picked up on my plucky, flirtatious banter. “I’ll take him,” he said, and snatched my file out of the nurse’s hand. The place was crawling with WWII and Korean War vets who were overweight, disillusioned and sporting serious alcohol problems. I was a breath of fresh air. We spent most of that first session talking books.

Today they had me fill out a ten-page “how are we doing?” questionnaire. I rated everything to do with cleanliness and courtesy high, but then the questions began to shift, and suddenly it was all about “how was I doing”. They began digging around to see if I had a drug problem. If I was mentally disturbed. I sat back, lit a cigarette, and pondered whether to go on or toss the whole thing in the round file. Out of curiosity, I went on.

I haven’t had a drink in 33 years, and my drug problem amounts to cigarettes and coffee. Where it got interesting is when I got to the questions around depression and anxiety. It made me think of the time I sat the entire day for days on end, staring out the window over a cold cup of coffee. Sleep was impossible except in snatches, and I dropped forty pounds in two weeks. It finally got so bad I went to a counselor.

Right off the bat, before she even had my Social Security number, she put me on Zoloft and told me I was at the patriarchal stage of life and should assume that role, then I’d feel better. I made it through four weekly meetings with her, and then one morning I found myself on a ridge at sunrise, dancing like a dervish and crying out, “They’re stealing my fire!”

After that I began exercising like a demon, forced myself to write and to play music, and got seriously Spartan in all aspects of my life. Eventually,slowly, the blackness began to lift.

If I’d answered truthfully every question on that questionnaire that probed for depression and anxiety they probably would have hauled me in for observation. So I toned down my answers to make me look like a run-of-the-mill vet mired in melancholy.

When I told that counselor I’d flushed the Zoloft down the toilet, she told me I was in danger of spontaneous suicide.

“Is there any other kind?” I asked.

She said it wasn’t a laughing matter.

I said, “Well maybe you’ll find this funny–I’m flushing you down the toilet, too.”

She sat up straight and her eyes went cold. In slow, measured tones, she said: “Based on what you’ve told me, I can have you committed, you know.”

“You really don’t want to open that can of worms,” I said, and walked out.

I’d rather be a gored matador face down in the hot sand than turn myself over to these soul crushers.