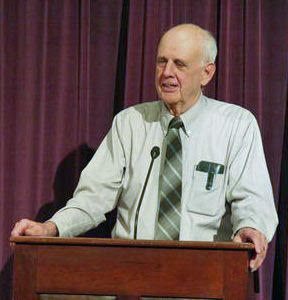 The fatal flaw in the otherwise rock-solid lifestyle of people like Scott Nearing, William Stafford, Wendell Berry and Robert Frost is that fences don’t make good neighbors, they start wars.

Down & Out in Paris & London, the British secret service had a dossier on George Orwell as thick as three volumes of Shakespeare. Do you think the FBI has one on Wendell Berry, who works the land and doesn’t own a computer?

Wendell Berry’s not just a farmer. He picks up spare change writing books, and he’s also pulled down a Guggenheim and a Rockefeller. He flies around the country and gets paid to give lectures to college students. Do they make him take off his shoes at the boarding gate? Do they shake him down for explosives?

Wendell gave a talk at George Washington University in D.C. once. He started off by saying his flying around the country on commercial airliners contradicts what he advocates, that we all to some extent live lives of conflicting values.

His audience gave a sigh of relief.