the death of intuition 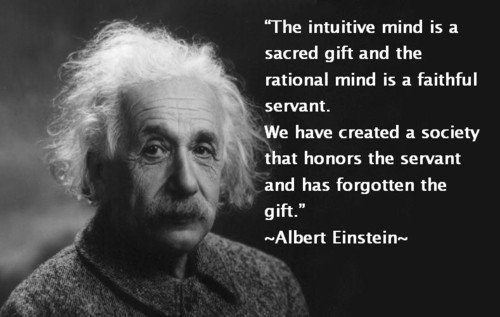 The Death of Intuition

Carl and Fred studied him closely. They watched the way he mowed the lawn. He did it just like the neighbors on either side except he pushed the thing with his hands. There was no motor. Was this the key, the inroad into what made him tick, that he used neither gasoline nor electricity?

They waited until it got dark and he went inside. Sure enough, soon there was candlelight flickering on the far side of the pulled blinds. They felt they were making progress. They drove off and didn’t turn on their headlights until they rounded the corner.

Back at headquarters they turned in their report to the Data Analysis Chief.

“Carl’s got a point there,” said Fred. “And what about the lawn mower? You’re not telling us the lawn mower is oil, are you? And what about Tiberius himself?” Carl and Fred did the high five and then stood there grinning with their thumbs hooked behind their suspenders.

“Yes,” said the Chief. “That’s precisely what I’m telling you. Everything in today’s world is oil. Everything and everyone.”

“Oh yeah?” said Carl, his voice sliced with the belligerence of uncertainty.

“Yeah,” said the Chief. “It takes oil, bottom line, to generate the power to build the lawn mower. And where do you think Tiberius gets the energy to push the damn thing?”

The Chief rocked back in his chair and studied Carl and Fred. They’d been good at what they did just ten short year ago, but in those ten years things had lurched forward so far and so fast that they’d been left in the dust. They were bullies in a world requiring abstract thought.

“Well what then?” asked Carl.

“It’s oil that runs the machinery that plants the seeds and harvests the crops. Oil packages and transports the food. Oil makes possible the conversion of this food into body energy that pushes the mower thru the man.”

“Thru any man,” said the Chief. “Good God Almighty.”

“Why won’t you let us interrogate him?” asked Fred. “Yank his ass out of bed in the middle of the night and drag him down to headquarters.”

“Is your memory as deficient as your understanding?” asked the Chief. “We’ve already tried that. Years ago. You tried it. The both of you.”

“Yeah, but our hands were tied. They never let us go all the way,” said Carl. “If you untie our hands, we’ll break him.”

“Break him?” said the Chief. “We don’t want to break him, we want to figure him out!”

This was news to Carl and Fred.

“What the hell for?” asked Carl, and instantly regretted it. “I’m sorry,” he said. “I’m sorry, Chief. Ours is not to wonder why, ours–I stand corrected. I’m ready to–“

Fred got busy examining his fingers, as if he’d just discovered he had fingers.

“You’re right about one thing though,” said the Chief. “Yours is not to wonder why. Now get the hell out of my office.”

They turned and left.

The Chief lit a cigarette and put on his smoke evacuation helmet with the plastic tube jutting out the top and going straight thru the ceiling into the smoke containment tank on the roof. He flicked on the exhaust fan and took a deep drag on the cigarette he stuck thru the smoke hole in the helmet at mouth level.

The Chief himself didn’t know why it was important to understand people like Tiberius when there were so few of them. According to the Inner Sanctum Guidelines, everything fit together nicely until a Tiberius or two got thrown into the equation, and then everything came unraveled. Which implied that everything was founded in lie. And not just an expedient lie, a fundamental lie. This implication was the ultimate threat to The Order and was kept under lock and key in a Cosmic Suspension file.

What Carl had suggested, to break and eradicate the Tiberius factor, wasn’t as preposterous as the Chief had made it seem. It was an unspoken option that was gathering momentum. The sole deterrent to putting this option into play was a deep-seated fear of some unknowable truth. This fear was rooted in intuition, and even as the Chief exhaled into his smoke evacuation helmet, a decision to eradicate intuition was being reached at a level so high up the Chief did not know it existed.