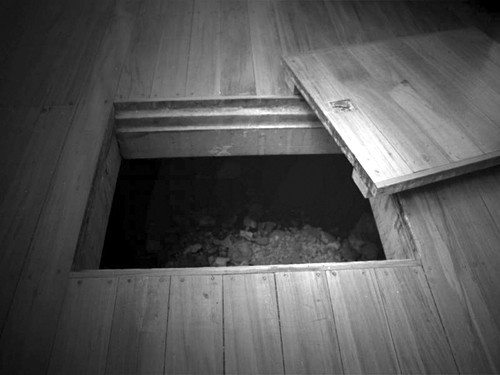 The trap door opened and a little man wearing a green visor stuck his head out. “Next?” he said.
This had an impact on my idea of how trap doors work. I though you fell thru them unexpectedly just when you thought things were starting to go your way.
I started to walk around the trap door, but the little man reached out and grabbed my ankle. “Where do you think you’re going?” he said.
“I’m not next,” I said, and he said, “That’s what they all say. Climb on in here.”
“No, no,” I said. “I’m heading over there.”
“Over there where?” he said. “Look around.”
I did, and he was right. There was no over there, there was nothing, not even space, just this open trap door made of weathered wood and the little man in the green visor who had hold of my ankle.
“I think I’ll go back where I came from,” I said, and tried to yank my foot loose, but he held on tight.
He leaned into the darkness down under the trap door. “He’s looking for options,” he said, then he stuck his head back out and smiled.