an excerpt from Tire Grabbers… 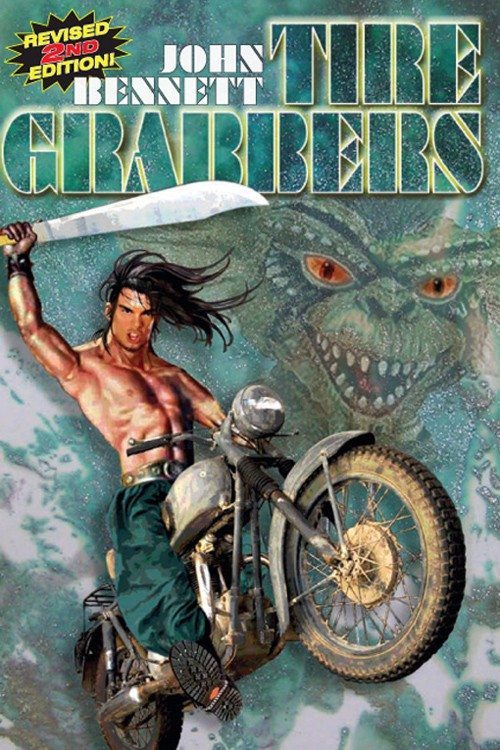 The revised second edition of Tire Grabbers, speculative fiction that goes beyond Orwell and Huxley, projecting a future into which we are rapidly moving. It is the story of Moloch, a horrific force beyond good and evil that mutates out of the modern world and begins feeding on spiritual marrow, threatening Mankind’s extinction. And it is the story of the children who challenge Moloch, with their innocence and with an army of mind creatures that they 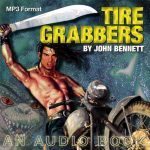 eject into the outer world and call (for reasons that become evident as the plot thickens) Tire Grabbers. The first edition attracted a cult following and received ravereviews. Please click here… or the cover above if you are interested in buying this book.

Also available in e-book format for $9.00 from Metropolis/Outlaw Poetry. Use the following link and scroll to the bottom of the page for e-book ordering information.

This, then, was the dawning of the Third Great Era of humanity. The Age of Innocence had erupted into the Era of the Great Schism, and now Moloch was radiating out over the earth like the shadow from an eclipsed sun — colorless, invisible, neither good nor evil, without conscience or consciousness, devouring spiritual marrow and washing it down with darkness.

The transition from the Era of the Great Schism into the Reign of Moloch had been building incrementally since Moloch began surfacing from its dormant state at the dawn of the Industrial Revolution. In the Hard World, where evil was the prime mover, self-induced mind manipulation blinded the Hunters to what was taking place, and in the Secret Place, where the Dreamers took it as a given that goodness prevailed, the blind spot was the result of a complacency that they took for serenity. As a result, no one anywhere saw coming what had now arrived — the full awakening of Moloch.

John Bennett | In Defense of Differences 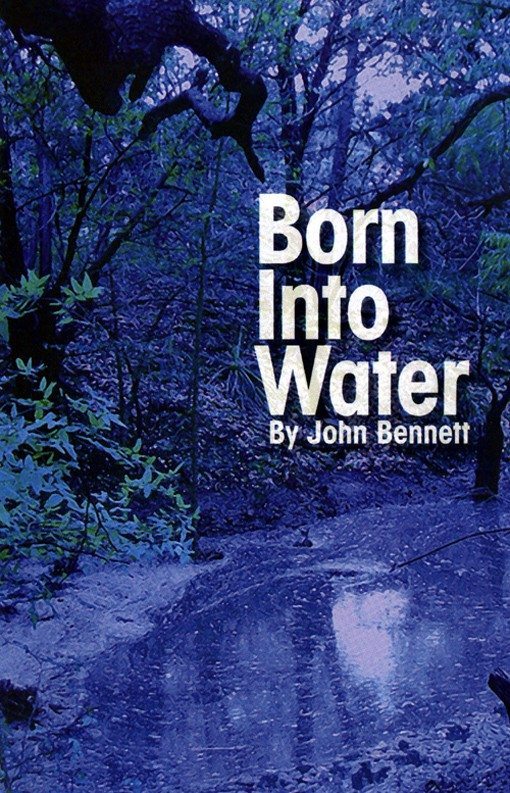 The poem below is included in Born Into Water a book of poems by John Bennett. If you’re interested in purchasing this book, go here…

In Defense of Differences

It’s okay if
weed’s not
your bag but
don’t knock
people who
smoke it like
Louis Armstrong
all his life or
Mose Allison who
cut a
best-selling
album at
the age of
82 or
my friend
Joe in
his 80s
who is
planning to
cross the
Pacific
in a
sailboat. 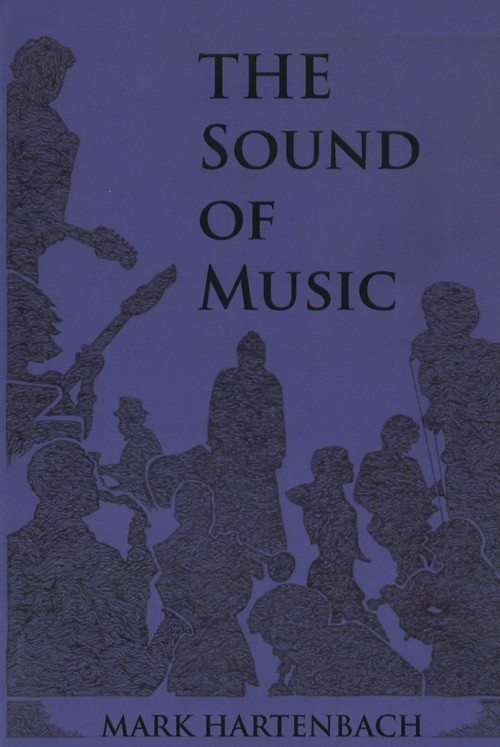 a documentary was released recently
on the life & music of townes van zandt
a hard living songwriter
i bought this on vinyl maybe twenty-five years ago
but i’m listening to the cd now
i found it in a bargain bin
not on the original tomato label
but i think since tomato has re-released it
because of the renewed interest in him
there are two dozen tracks
but strangely enough
he kicks it off with “pancho & lefty”
by far his most well known song
that’s been recorded many times
& i believe was a big hit for willie nelson
my favorite van zandt song is “waitin’ round to die”
i read that he wrote this song right after getting married
he went in a closet & told his bride he was going to write a song
she must have been expecting a romantic love song
but instead he sang this fatalist ode about wife-beating
robbery & prison, a woman taking all his money
& the best friend he’s ever seen — codeine
i’ve played this song hundreds of times
it’s one of a few that i can remember all the words to

John Bennett | Passing on the Fire 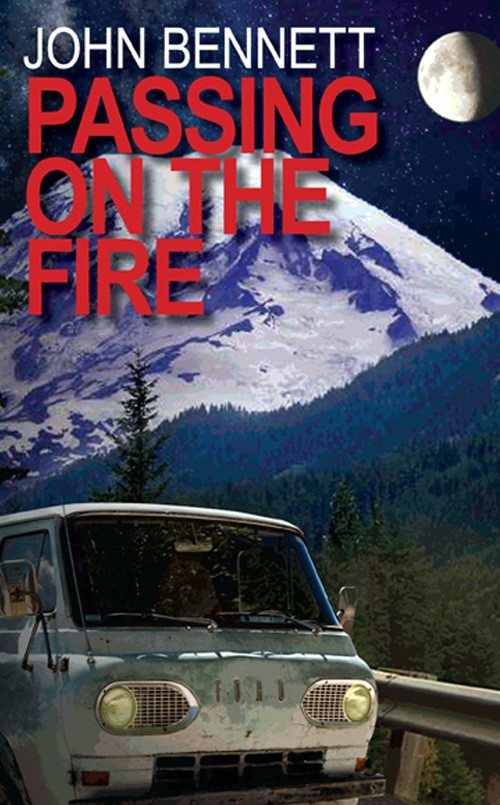 Passing on the Fire

In 1987 I published a piece of journalism in The Clinton Street Quarterly that won the Darrell Bob Houston Award. That kicked off a sporadic burst of journalistic writing that appeared primarily in the Seattle Weekly and the Ellensburg Daily Record. Passing on the Fire consists of selections from that writing. Below is the introduction to the collection that gives you a little more detail.

Introduction to Passing on the Fire:

Journalism has never been my main bag, although in the distant past I did receive a partial journalism scholarship from The American Legion. The American Legion! I sat through the first half of orientation at the University of Connecticut and on break walked out the door and down the road into real life, where I’ve been knocking around ever since.

What journalism I did wind up writing went down sporadically from 1987 until 2001. What kicked it off was De-euphemizing the Sixties, a piece on a Grateful Dead/Bob Dylan concert published in The Clinton Street Quarterly, now defunct but then coming out of Portland, Oregon. It was my way of easing back into the action after a two-year writing hiatus, and it won the Darrell Bob Houston Award.

Darrell Bob Houston was a renegade journalist who pushed the envelope on what constitutes acceptable journalism. The award was presented at the Blue Moon Tavern in Seattle where Tom Robbins handed me a $1,000 check and a trophy of someone slinging a bull over his head by its tail. “Thanks,” I said, “and a round for the house,” an acceptance speech that drew enthusiastic response from the Blue Moon clientele.

A number of people saw the D.B. Houston Award as a door opener into what they referred to as The Big Time, and I was encouraged to “strike while the iron was hot.” The Seattle Weekly was the main sponsor of the Award, and I began peppering them with personal experiences thinly disguised as human-interest articles, most of which they published. But it wasn’t long before I drifted back into the no-holds-barred writing I’d grown accustomed to over the years, and the door to The Big Time quietly closed again.

The second phase of my journalism career began when the Ellensburg Daily Record, my hometown paper, approached me with the idea of doing a weekly column consisting mainly of personality profiles of people living in the community, and this I did on and off from 1992 until 2001. The column was called Air Guitar, and my method was to turn on the tape recorder, clear my throat, and ask: “Where were you born?” From there on out I tried not to interrupt as the interviewee wandered down memory lane. The column was immensely popular, and in 1997 I published a collection of these profiles titled Rodeo Town, now out of print.

About a year ago it occurred to me it might be a good idea to publish a selection of all my journalistic writing, but most of what I wrote for the local paper has a strong local flavor, and I wasn’t sure how well it would be received by a wider audience. So what I’ve done in Passing on the Fire is cull those pieces from the Daily Record that have a more universal appeal and include them with the Seattle Weekly pieces and the Clinton Street Quarterly gem that got the ball rolling.

It is, I hope, an entertaining read. 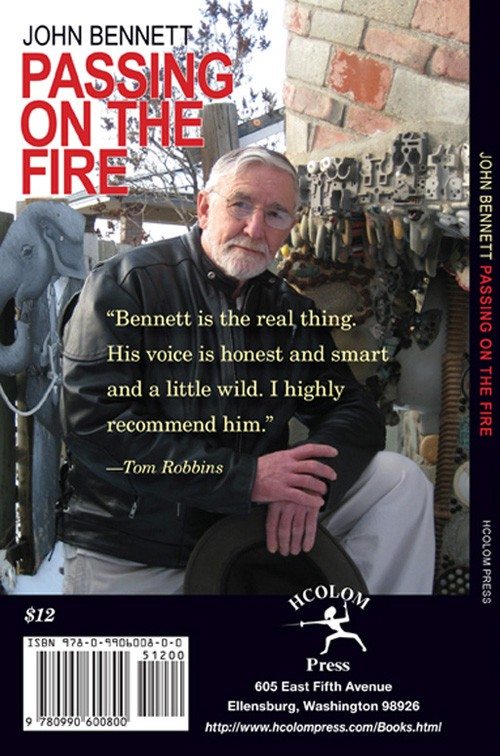 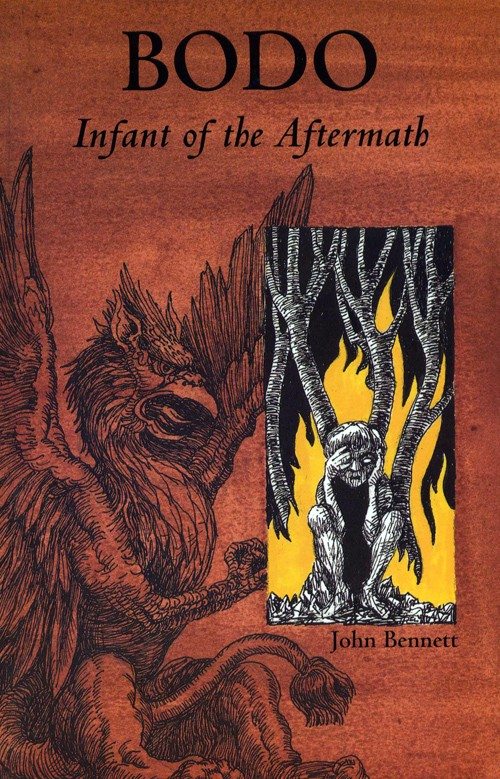 BODO (Infant of the Aftermath)

A novel about a German war orphan who grows up in America and self-destructs in a burst of flashbacks in the Sixties.

“Bodo is as well-told and movingly described a story as many a ballyhooed book stacked in shiny covers in major bookstores.” — San Diego Reader, San Diego, CA 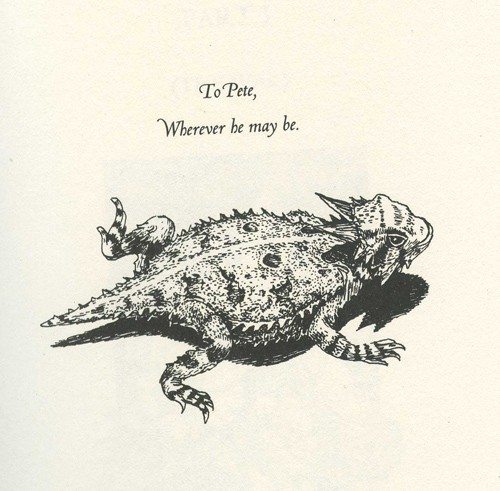 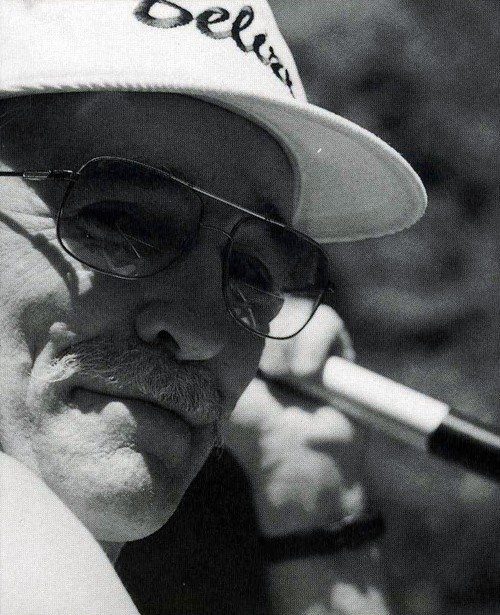 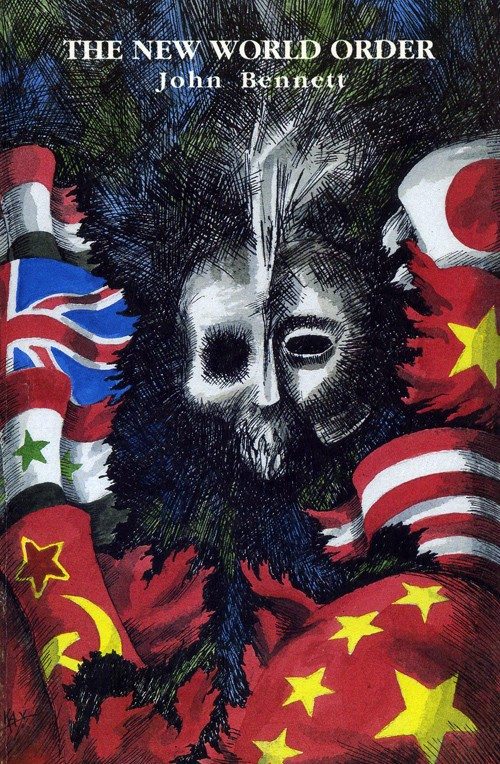 To Jesse Helms, without whose inspiration this collection might never have coalesced. 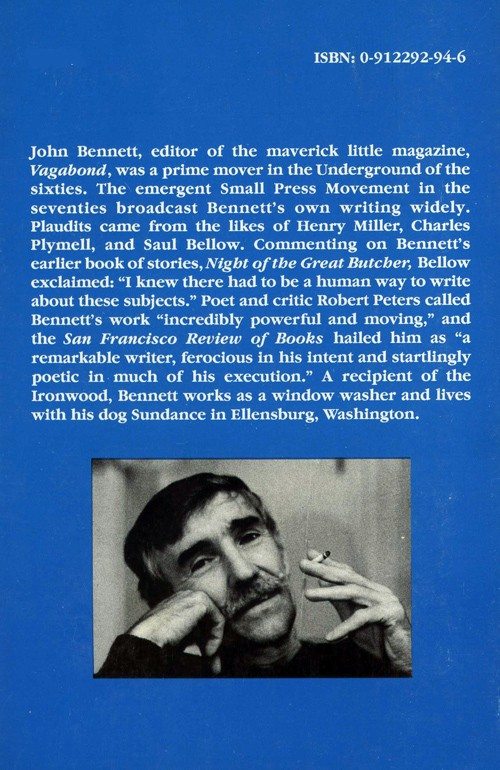 What does one say for a bio? The years roll by, and I find I cannot come in from the cold. I find that I am less concerned, as time goes by, with what I am in opposition to than what it is what I have been in opposition to has kept me apart from. Of paramount importance for me in these days of wine and roses is to make an effort to lead my life minute by minute, blow by blow, in accordance with an inner voice and gyroscope that have next to nothing to do with the Industrial Revolution, the Information Age, and progress in general. I live alone with a white German shepherd named Sundance. I earn my keep through simple labor with my hands. I dance like a crazed dervish when the spirit moves me. I write, for the most part, what I seem compelled to write, and let the pieces fall. I am rapidly becoming what in my heart of hearts I always feared I’d become — an aging eccentric — and it ain’t half bad.