the life & death of the long-distance runner 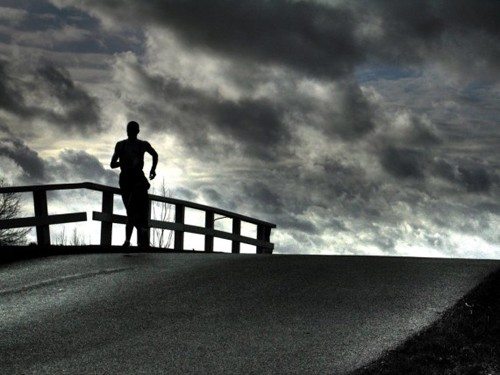 The Life & Death of the Long-Distance Runner

A good death, he would tell them, is a matter of timing, and they’d break out in tears or laughter, depending on who he was talking to, the young or the old.

Death is an abstraction for the young that shades into possibility as time goes on. It can be many things for the old, ranging from a dark cloud to a great release. But where does timing fit in? Who is he addressing? A high-school assembly would yawn and whisper to each other and half the boys would have a hard-on, death’s greatest adversary. An Alzheimer’s ward? They’d forget what he said before he was done saying it. A gathering of Lutherans? They’d put their hands over their ears and sing loud praise to Jesus, champion of life in the hereafter.

He’s addressing himself. He’s the embodiment of the loneliness of the long-distance runner, and he’s his own coach.

The long-distance runner begins timing death from an early age, long before he knows that’s what he’s doing. His life is ribboned with death. The race is of no consequence, what counts is gliding alone thru the forest, up and over the hills, along the ocean shore or the banks of a river.

Death is a flow and life is its great impediment. Life is cluttered with the obstacles of survival, it chokes on its thirst for eternity. If you know death like a lover, you want to slip into her arms when the time comes, and you start your courtship long before it arrives. Life’s snares and pitfalls that others embrace are anathema to you. You become an angle’s bright shadow on the dark face of existence.

This is when timing becomes crucial. You need to veer away from those who would save you. Who would hook you up to a false heart and false lungs. Who would make your hair fall out and your skin go gray with life-saving poisons. Who would strap you in a rocking chair and spoon apple sauce into your toothless dry mouth. Who would whisper in your one good ear that life is sacred.

Never let things get so far. Disengage long before that. Disengage when you first see it coming. Disengage but never stop running. That’s not a paradox. You have to know the difference between living life and saving it.

Living life is a fine way to die. Live it to the hilt and then fade into death’s mist.

Tagged as John Bennett, Poetry, The Life & Death of the Long-Distance Runner