let it all fall away 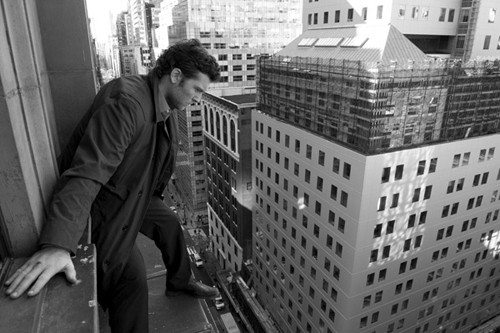 Let It All Fall Away

Surreal is an overlay. Sir Lancelot is a curly-haired lady’s man. Surly will surely lead to confrontation. Shirley Temple is an emotional wreck. Surcease is dirt on the coffin. Let’s all hold hands and sing Dylan songs to show those tanks we mean business. To surrender is to skim off the top. It’s lonely up here on this ten-storey ledge.

Down on the street a cross-section of what we’re made of. The ones shouting jump, the woman with tears in her eyes, the hipster on his smart phone, the shifty-eyed pickpocket. The cabbies pulled to the curb, sensing fares. The firemen and the cops, the popcorn vendor and the shrink. From up here they all look the same.

The shrink is finishing his Starbuck’s latte before he takes the elevator up to talk with me. He scans the note I left. “Hmmm,” he says. He’s looking for egress into my state-of-mind. He jots words down on a pad: surreal, confrontation, emotional wreck, tanks, skim off the top. He thinks he sees where I’m coming from, crushes his empty latte cup and drops it to the ground.

A plain clothesman escorts the shrink to the building’s entrance. A stray dog runs after them, barking. A cop steps up and whacks the dog with his club. The dog yelps and runs back into the crowd. The crowd laughs–comic relief.

They enter the building.

The window I stepped out of is still open behind me. The office door to the hallway is open. I wait until I hear the elevator ding, and then I close my eyes, spread my arms, and let it all fall away.

Tagged as John Bennett, Let It All Fall Away, Poetry