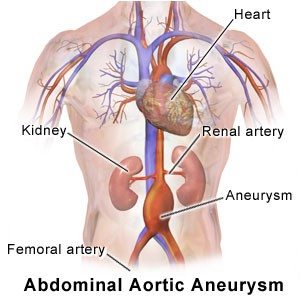 Like with my aneurysm surgery. I woke up at four a.m. in excruciating pain that at first felt like back pain, but I quickly realized it wasn’t. It was internal, and I related it to a night pain that seemed to be rectal and I’d been experiencing on and off for about a year–something had crossed a line.

I managed to get myself to the emergency room, and they pumped me full of pain killers and did an MRI. I was informed that my two iliac arteries that run from the aorta down thru the abdominal cavity and connect up with the femur arteries in the legs each had a bulge (aneurysm) on the verge of bursting, and if that happened, I’d be dead in nothing flat. This bit of information, along with the fact that I was spitting blood, made me roll the dice.

An excellent surgeon slit me open from sternum to groin, laid my intestines on a damp towel next to me on the operating table to give him room to work, and went about slicing out the affected areas of the arteries and splicing in some substitute tubing. Six hours later they wheeled me into ICU and three days after that I came more or less to my senses. The first thing I remember thinking was I had to get out of there. A bowel movement was prerequisite for release, so I faked one and some friends carted me home.

But the Percocet they’d sent me home with wasn’t touching the pain, and in a few days I was back in the emergency room where a doctor unrelated to my case announced I had pneumonia and a lump on my kidney. They put me in a room with an I-V full of pain-killer and pretty much left me alone.

When I felt the pain was manageable, I said I was ready to go home, and they turned me loose. But not before telling me that I now had peripheral cardiovascular disease. There was no further mention of pneumonia or a lump on my kidney.

I spent the next year, after a few post-op check-ups, giving my body free rein to heal itself.

Obviously connected to the aneurysms, the recurring “rectal” pain vanished after the operation, as I knew it would. I never mentioned it to the doctors for fear they’d ream me a new asshole.

Tagged as aneurysm surgery, do not harm, John Bennett, Poetry