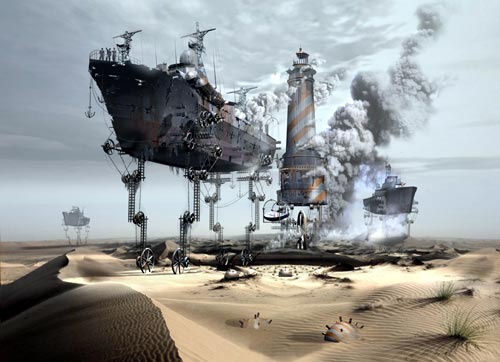 It was a foggy night. The streets were abandoned, the piers dilapidated from years of disuse. Ever since the black day toxicity finally killed off the last microbe of living matter in the earth’s oceans, no ship had sailed the seven seas, and scientists determined that with the exception of certain strains of lizards, the earth’s remaining land and air species would perish on contact with the dark liquid that had been the cradle of life. The Grandfather wasted no time in coming up with a Compassion Program. He had the oceans sealed off with a thirty-foot high ribbon of cyclone fencing, a mammoth construction project that saved hundreds of thousands of lives and was heritage sensitive, turning three-fourths of the earth’s surface into a national monument—citizens could twine their fingers through the fence links and gaze upon the past. The project generated millions of jobs, and upon its completion, its upkeep became the fifth largest industry in the domain of Normalcy.