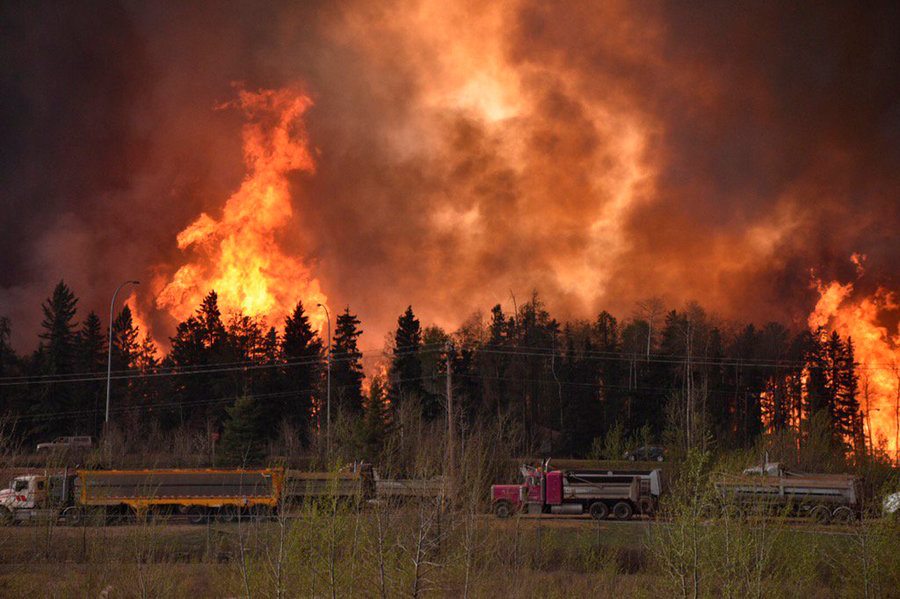 The whole goddamn state is on fire. The town is filled with smoke, thicker than L.A. smog, thicker than London fog. And here I sit in my van on the hill, the rodeo grounds below barely visible, smoking, drinking a mocha, encompassed by disaster.

No one else is up here except a Kiro News two-man team in a white sedan – a tech guy in jeans and t-shirt and a black guy with glasses in white slacks and a blue button-down shirt. They’re out there in the smoke muttering and cursing and setting up a camera on a high tripod. Now they’ve hooked up a mike, the cord snaking over to the edge of the juniper where the black guy has moved. “One-two-three-four-five-six-seven-eight-nine-ten,” he says into the mike, fast and loud. Then he says it again. Then he holds up a white card for the camera to take a reading off.

“Everything I pan breaks up,” the tech guy says.

“Oh, lord,” says the black guy, runs one hand nervously over his almost bald head and tucks his shirt in all around.

The tech guy is bent over, his hands on his knees, studying his camera.

“Maybe we should…” says the black guy, and I couldn’t hear the rest.

Then the camera is rolling.

“Take a look around me,” the black guy says with a sweeping gesture, “and you can see how much smoke there is. The air is toxic. It’s worse than the Mt. Saint Helens disaster.”

Mt. Saint Helens makes this look like a clear day on a tropical beach, I think, having experienced both.

Then the tech guy says something and the black guy holds up a strip of paper and wiggles it, claiming that there’s a breeze stirring, a breeze of hope. There is no breeze.

This isn’t live. They’re recording in snippets. Someone back at the station will edit it, splice it together.

They’re finished now, breaking down their equipment, laughing and making jokes about Hanford, ready to get back to the hotel for a stiff drink in the bar before heading home to Seattle.

This Shard is coming to you live from Ellensburg, Washington. It will go out over the internet in approximately 30 minutes, scooping Kiro 7 News.