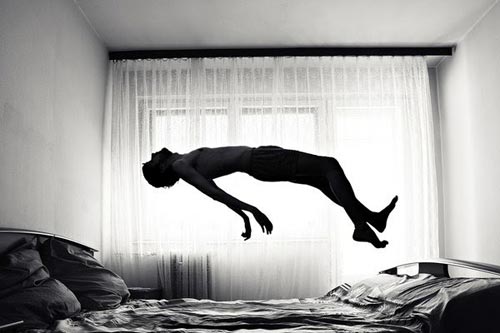 The nap was too long. I woke up and it was no longer winter. I opened the front door, and all my friends were out there on crutches.

“My friends!” I cried out, so glad to see them again, terribly aged but still recognizable.

“Typical,” said Zora, the trapeze artist with whom I’d once had a fling. “You come floating out the door like nothing’s happened.”

And indeed she was right, I was floating. My legs had vanished, I was nothing but torso and dream remnants. I willed myself higher, not to look down on them, but to gain better perspective. The sidewalks on both sides of street were crowded with people on crutches for three blocks in both directions. But I never had that many friends, I didn’t have enough friends to fill the front lawn. There must have been enemies among them, enemies and onlookers.

I began floating higher and got tangled in the branches of the maple tree. The leaves on the branches were tiny and pale green. It was spring.

“Typical,” said Zora as I struggled to free myself from the branches, and it came rushing back to me how badly I’d treated everyone before the dream, before my legs vanished and I began to float.

“Your crutches aren’t real!” I called out as I floated down from the tree. “They’re symbolic of the damage I’ve done you!”

“They’re real okay,” said Ulysses, someone with whom I’d traveled the world in our youth, fought the enemy standing back to back. “These are emotional legs,” he said. “These are the legs of damaged love.”

And just like that my weightlessness vanished and a lifetime of guilt sent me crashing down hard on the sidewalk. I also had no arms, and I lay there rocking side to side like a beached whale.

I was just a torso tangled in tattered dreams, and my friends began poking me with their crutches.