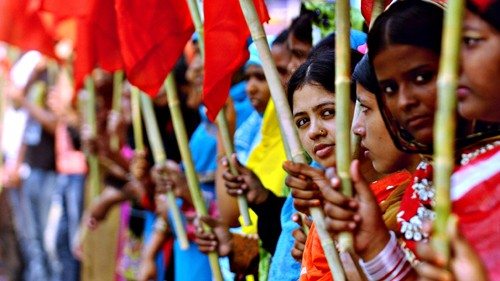 The Committee for the People of Bangladesh hired a Canadian PR firm to see what could be done to get the people of the United States to muster a little empathy for the one thousand plus garment workers who perished in the eight-story collapsible sweat shop in roughly the same time frame that the pressure-cooker bombs went off at the Boston Marathon. Because mutilation, not death, was the hallmark of the Boston Marathon disaster, resulting in a number of limb amputations, the PR firm played up the lost-limb angle, pointing out that many of those who didn’t die in the Bangladesh disaster had to have limbs amputated in order to free them from the rubble of the collapsed building. But the tactic backfired–the majority of U.S. citizens felt that the people of Bangladesh were trying to make light of the Boston tragedy. The firm shifted its emphasis back to the death toll, but their efforts were met with indifference.

Then an up-and-coming ladder climber brainstormed the clothing angle, claiming that anywhere from 60 to 80% of the clothing worn by participants in the Boston Marathon was made in Bangladesh sweat shops, and wiping out a thousand highly experienced sweat-shop workers in one fell swoop meant those vacancies would be filled by less experienced workers, and for a time the quality of the clothing reaching the U.S. from Bangladesh would be spotty at best–seams unraveling, soles flapping off shoes, colors running in the wash.

The average America, who now buys most of his clothing at Good Will, was unmoved, but marathon runners and sport-oriented people in general did go into mourning, not for the dead workers, but over the projected decline in the quality of goods from Bangladesh.

A committee was formed, made up of members of various sports organizations, and in short order a petition was put in circulation to stop doing business with Bangladesh until the quality of their goods improved.