selling your soul to the devil 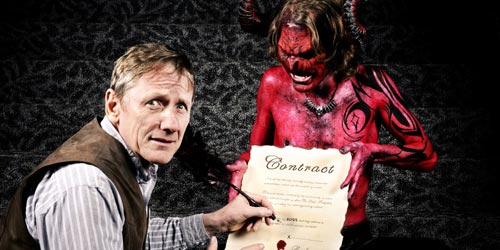 Selling Your Soul to the Devil

I’m not on the hill. I’m sitting in a warm house with a mocha. I must be selling out. Letting people down. People are sending me nasty emails, they’re all pissed off that I took a swipe at old Bob. I’ve been called everything from a grouch to sanctimonious. I’ve been castigated for drinking mochas. I’ve been asked when I’m going to do a commercial for Starbucks.

Why the fuck would I do a commercial for Starbucks? Oh, I get it. If I drink mochas, I must go to Starbucks, not the local coffee spot run by a black guy who used to fly falcons. I must be a yuppie, who else drinks that kind of pussy drink? I’ll bet I’m not even a 75-year-old window cleaner with a busted nose and artificial arteries. I’d better take a good look in the mirror.

My whole life is a lie, what the hell was I doing watching the Superbowl anyway? My true colors are showing. I’m envious and greedy and a hypocrite. What do I have to show for my life, did I graduate from college, have I ever been published in the New Yorker, where’s my 401-k? Sour grapes, that about covers it.

I’m not even on Facebook, that says something right there. I’m out of step, resentful of progress. Next thing you know I’ll be attacking Woody Guthrie, the Beatles, Ray Charles. If there was a flag handy I’d desecrate it. I should follow Hellen Keller’s example and pull myself up by my bootstraps.

There’s something mighty suspicious going on here. Am I willing to die for what I believe in, like d.a. Levy?

I’m typing on a computer that will not let me spell levy with a small-case “l.” At least not in the paragraph above with the d.a. In front of it. Ha! It just did it again! Put a capital “i” on “in.” I get it, it’s because of the period after the “a.” The computer figures once I typed that period, that was the end of something. And so it was. I can go back and take the period after the “a” out, and then I’ll have access to small case and I can doctor up the rest — except for the period after the “a.” But if I put that back in, I’m right back where I started. I think I’ll leave the whole fucking thing just like it is.

Yes, I know, I use too much profanity and I’m drifting further and further from the point. I’m running out of time to make an Act of Contrition and get my shit together. But as my four-year-old granddaughter said toward the end of the years I raised her when the kite string broke and the red kite went spinning off into a turbulent windy sky – “Oh, well,” she said, and headed for home.

We were on the same hill where I write Shards, except for today, when I’m sitting behind this computer and selling my soul to the devil.

Tagged as John Bennett, Poetry, Selling Your Soul to the Devil