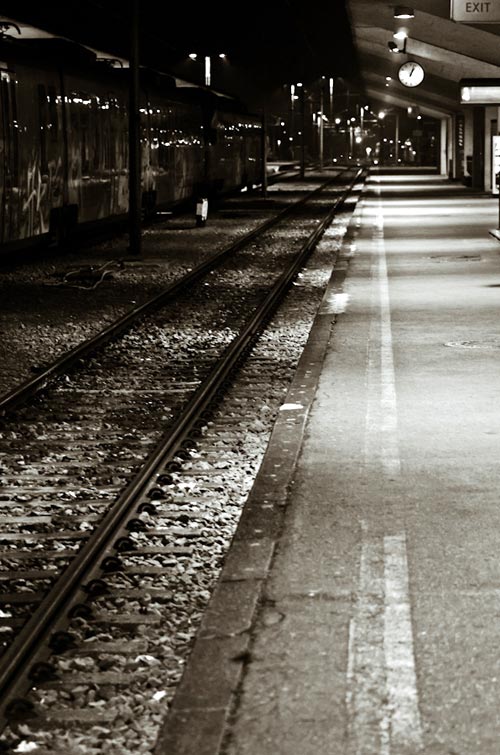 A lot of other things are true that I’d rather not talk about. Go ahead, twist my arm, I won’t sit up like a dog and bark out names.

This is usually the point where the station empties. But tonight there’s someone back in the shadows with her tongue out and her eyes crossed. Someone else missed the train. Time for courtship.

She sidles along the lockers and stands on her head by the water fountain. Her dress falls over her head like a tent. She wears polka-dot panties.

I don’t stare, just steal a glance and then pretend to study the train schedule. The last train to Schenectady leaves at twelve-ten, and it’s a quarter past eleven.

There’s time to kill, things to say. “Hello, my name’s Hank, did you miss your train? Me too, let’s make love in the men’s room! No, I’m sorry, you’re right. People don’t make love in the men’s room, they have sex. Well, let’s have sex then, why not, life’s short and we’ve missed our train. Wait, please don’t go, can’t you see that we’re meant for each other? Isn’t it plain as the nose on your face? Please, stop standing on your head. Your voice is muffled and I can’t see your face. Are you an ugly girl? It doesn’t matter. We can still have sex in the men’s room and raise six healthy children. I’ll get a job, I promise, if I could just arrive somewhere. No, this isn’t odd, it’s different but not odd, alone in the station with the love of your life standing on her head by the water fountain. No! I don’t say that to all the girls!”

About then the night janitor comes along with his push-broom. “Missed your train again, Hank?” he says.

“I just came in for the paper. What have they done with the vending machines? Why are they always moving things around? Be careful of that woman standing on her head by the water fountain. Sweep around her. She’s going to Schenectady.”

“Sure thing,” says the janitor, and moves on thru the empty station.

I lift the hem of her dress and peek in. Her eyes are still crossed, but she’s no longer sticking her tongue out. How could she and still talk? I’m not crazy. “You are beautiful,” I say.

I go down on my knees and crawl into the tent. We are alone together at last.

“Last call for the twelve-ten to Schenectady, leaving on track nine,” the station master announces over the loudspeaker, but we pay him no mind.

Tagged as John Bennett, Poetry, The Twelve-ten to Schenectady