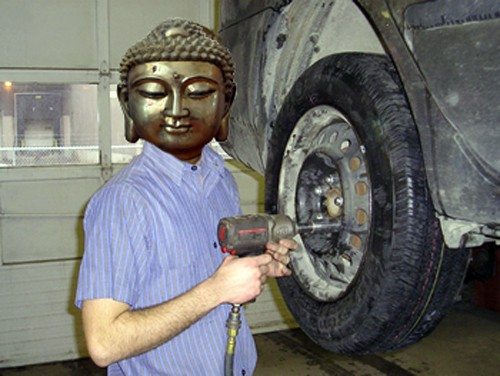 Chøgyam Trungpa was a Buddhist bad boy into crazy wisdom who married a sixteen-year-old Scottish girl and then drunk ran his sports car into a joke shop in Oxford and wound up partially paralyzed down his left side. He moved to America in 1970 when he was 30, founded the Naropa Institute, hobnobbed with the likes of Ram Dass and Allen Ginsberg, wore $500 suits, laid every woman in sight, drank like a fish and died of cirrhosis of the liver at the age of 48.

He also led a party of 300 out of Tibet into India when he was barely twenty to escape the Chinese invasion, a ten-month-plus exodus winding through the Himalayas, across deserts, on horseback and then on foot and by the end eating boiled shoe leather to survive.

Back in my drinking days I ran with a wild bunch and I saw a lot of crazy wisdom go down. I saw Cowboy Bob sidearm a snowball and knock an empty beer bottle off an abandoned refrigerator thirty yards away. He did it on a bet without breaking stride and without a second’s hesitation; three of us were trudging up a hillside thru the snow to score some pot from a dealer who lived ten miles out of town in a single-wide trailer with no electricity and no running water.

Bob was always in motion. I saw him chalk his cue while pacing around a pool table in a bar and in his gravely voice declare, “Eight ball on the break, left corner pocket, $100,” and when his opponent said, “Shit, you got it, fool,” Bob sent the cue ball exploding into the racked balls, and the eight ball dropped into the left corner pocket.

And I watched Bob’s magic go rough around the edges, I watched people shake their heads and say he’d lost it, he was eating out of dumpsters and was 86d from every bar in town, and then one winter afternoon he slid into a dimly lit cocktail lounge with just me and two other people at the bar, slouched down on an end stool, and when the barmaid sighed and said, “Bob honey, you know I can’t serve you,” he said, “Yes, yes, well yes I know, but how about if I take this beer coaster here” (he had a beer coaster spinning on its edge on top of the bar) “and I kinda flip it on down to that TV up there at the other end of the bar and sort of have it land on top, half on, half off. How about that for a drink?” And without waiting for an answer, in one motion, Bob snatched up the spinning beer coaster and sent it sailing down the bar where it landed half on and half off the TV and, on the screen below, Howard Cosell looked up, and THE TV WENT DEAD!

I’ve yet to see anything to top that, but we always knew when the magic was in the air, and when it was, nothing could go wrong. One day driving my work van going north on two-lane blacktop, my helper beside me, Spence was coming the other way, and just as we were about to pass each other, without so much as making eye contact, we switched lanes and went streaking by each other on the wrong side of the road. The kid next to me began trembling uncontrollably and kept repeating over and over, “Oh, Christ! Oh, Jesus H. Christ!”

“That was my buddy Spence,” I explained, but the explanation didn’t seem to help much.

Another time, at the tail end of three days of drinking, Spence and I dropped some acid and drove eight miles out of town to a party, but when we got there the house was dark; we decided it was because it was 3 a.m. and the party had ended early; we headed back to town, and about halfway there we passed a highway patrol car going in the opposite direction.

“He’s going to turn around,” Spence said, and I said, “Goddamn you, Spence,” because he could make things like that happen just by saying they would. I looked in the side mirror, and the cop was U-turning with his red light flashing.

I pulled over and the cop got out of his patrol car and demanded driver’s license and registration, while in the back seat Spence’s dog Black Streak was going crazy trying to get at the cop.

“Control your animal,” the cop said, and Spence said, “Streak,” and Streak lay down on the seat.

The license was no problem, I just fished it out of my wallet, but the registration was another matter. I opened the glove box and a small avalanche of papers poured out. I reached in twice but came up with the wrong document each time, and then Spence reached in and pulled the registration out and handed it to the cop. “Step out of the car, sir,” the cop said, and I did.

We walked around to the back of the car and the cop had me bend over backwards and touch my nose and walk an imaginary line and tell him what day of the week I thought it was. Then he told me to lift my left leg out to the side and I did but apparently not long enough because he said, “Like this,” and he stuck out his own leg.

“Oh,” I said. “Like that.” And boing my left leg shot out at a right angle to my body and my right leg turned to steel and buried itself in the gravel and I stood there as rigid as a fence post.

It turned into a standoff, and the cop began wobbling and finally had to put his leg down. “Put your goddamn leg down,“ he snapped.

“I did pretty good!” I said, and the cop said, “Yeah, for three in the morning you did real good. Now listen up good, because I’m only going to say this once: when you signal to make a turn, you do it 100 yards in advance. You got that?”

I visualized a football field and began calculating what part of a mile 100 yards is, I was trying to figure out how much gas I’d burn from the time I signaled to the time I made my turn 100 yards down the road, and the cop said: “Do you understand what I’m telling you?” and I said, “Yes, officer, I do.”

“Now get out of here,” he said, and I got back in the car, started the engine, put it in gear and spun some gravel against the cop’s grill as I pulled onto the highway.

I always thought Chøgyam Trungpa was a run-of-the-mill conman until I heard about his eating boiled shoe leather on his exodus out of Tibet, an exodus of 300 souls with only 13 survivors.

Now I regret that he never met Cowboy Bob.