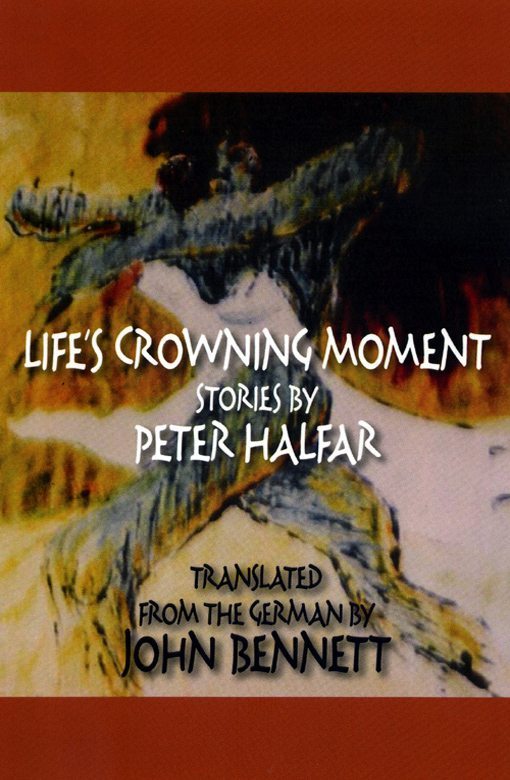 Translated from the German by John Bennett

I FIRST MET PETER HALFAR IN THE FALL of 1965 in Munich, Germany, where I began publishing Vagabond, a literary magazine. Maria Spaans, from the Netherlands, was art editor for the first two issues, and Peter followed in her footsteps. Five issues of Vagabond were published in Munich before I shifted the enterprise to New Orleans, and in that time Peter, Maria and I became close friends.

Peter’s favorite word is unheimlich. It colors his art and his outlook, and in the sense he means it, unheimlich translates as a quirky, sometimes playful, sometimes foreboding surrealism. The unheimlich permeated the pages of the early issues of Vagabond.

Peter, Maria and I went our separate ways after I left Munich, but we never fully lost contact, and when I returned to Europe for a visit in 1986, I saw them both. Maria was married and living in Paris, and Peter was still living in Munich. But he had become something of a world traveler since I last saw him, and it showed in his art, which was flourishing. And something new had been added. Shyly, on the last day of my visit, Peter pressed a thick folder into my hands. “Stories,” he said. “I have been writing stories. Unheimliche stories!”

I read them on the plane home. They were good. And a few years later, when I was bed-ridden with a bad back, I began translating them and, to Peter’s delight, getting them published.

Life’s Crowning Moment is comprised of thirteen of those translations, and Maria Spaans, now Maria Sail, using the phone and her fluency in four languages, greatly facilitated things by acting as an intermediary between Peter, myself and several other involved parties in Europe.

It’s been wonderful working with them both again. — John Bennett

Life Goes On:
Insights into the Art of Peter Halfar
by Arwed Vogel
(translated and edited by John Bennett)

IN AN AGE WHERE COMMERCIALISM HAS a death grip on the arts, an age in which so many writers conform to the dictates of the market place and leave their writing vulnerable to the whims of supply and demand, Peter Halfar goes his own way.

Halfar is an accomplished painter and draftsman as well as a writer of short stories, but whether reading his stories, looking at his paintings, or engaging him in conversation, doors open onto unexpected perspectives.

There are thirteen stories in Life’s Crowning Moment, each beginning in a commonplace setting (supper with friends, a chance encounter, a trip, a boy playing in the yard) but quickly evolving into the world of the unheimlich, an eerie world of shadows into which the reader is drawn. The author’s thought process spawns images that form storyboards and then are cut up and spliced into other images, other storyboards, the process feeding on itself. Apparently disconnected fragments are quickly and disconcertingly thrown together, and yet they are not disconnected, they are bound together by an inner force that runs through the writing. The reader is carried through this strange landscape by the force of Halfar’s insights, and then, at the story’s conclusion, gently released back into ordinary reality. And life goes on. Life goes on, says Halfar, a current of belief that runs through his writing and art.

The horrors of Fascism that he experienced in childhood exert a strong influence on much of Halfar’s work. Another influence is the cinema, and a prevalent theme is that of the diva—Tina Turner, Rita Hayworth, Patricia Highsmith and Marlene Dietrich are among his idols that appear in much of his writing and art. But there are other strong women with lower profiles who find their way into his stories, as in “The Lizard,” “The Night Marilyn Monroe Died,” and “The Queen’s Jubilee.”

Peter currently lives in Munich where he continues to paint and write, because, as he says, to create is to bring meaning to life.

Arwed Vogel studied in Munich and London and for the past twenty-five years he has been a professor of creative writing and poetry at the Ludwig-Maximilians University in Munich. His tales, short stories and poems have been translated into numerous languages. His first novel, “Die Haut der Steine,” was published in 2003. He has done translations and has collaborated on numerous autobiographies. He is a board member of the Bavarian chapter of the German Writers’ Union. 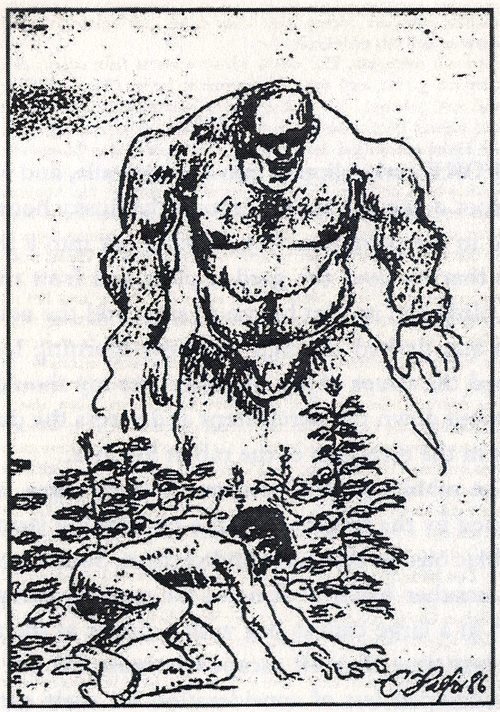 I AWOKE early, slipped into my coveralls, and went barefoot down the stairs through the dusky house. I stood in the open doorway, looking out into a thick haze that lay over the garden plots and fruit trees. The birds had not yet begun to sing, and the newly-risen sun drifted through the early-morning fog. I slipped the straps of my coveralls over my shoulders and went down the porch steps and across the damp grass in the direction of the rabbit hutches.

The rabbits sat still as stone in their cages, as if stunned by the fragrance of the blossoming jasmine and lilac bushes that surrounded them. Soon I would take another batch of females for mating, carrying them in a large canvas bag with a zipper at the top. The last time they all escaped because I’d left the bag unzipped out of consideration for their ears. I chased them down, terrified that I would not be able to catch them all.

The back of our house was at the bottom of a long grassy slope with elevated stone steps winding up to street level, and underneath these steps was a small, dark manger. As my eyes adjusted, I saw a thrush inside the manger, snuggled in some hay, its head turned in profile, its stern eye studying me fixedly.

I wandered on, past the beds of red and flesh-colored dahlias, breathing in their bitter aroma. I leaned over the edge of the half-moon wading pool and spit into the water. My reflection trembled and then dissolved into an expansion of quivering concentric rings.

Arriving at the front of the house again, I saw that the door was ajar. A dreamy feeling came over me. I was certain I’d closed the door when I went out.

A dark shape drifted into my peripheral vision. It was the speckled hen, perched on top of one of the pillars that stood on either side at the base of the steps leading up to the house. It waited there every morning for me to scatter grain, but today it seemed nailed in place, its head lolling from side to side.

A dread came over me, a feeling of deep despair. I dropped the wooden sword I’d been given for my birthday and with which I was planning to attack the stinging nettles that had taken over a large portion of the back garden. Whenever my father was home and he caught me in my bathing suit near the back garden, he’d grab hold of me, lift me high in the air, and toss me into the nettles. He wanted me to be a man, a hero, but I would much rather have been a farmer, surrounded by chickens and pigs. And so I ran off covered with stinging pustules to cry alone, not understanding anything, my world in chaos.

I hesitated at the open door before stepping into the dimness. The house was deathly quiet. I went silently past the kitchen where a large covered pot stood on the stove. I passed the wall closet in which I often hid for hours, and then I went past the basement stairs.

The steps leading to the upstairs bedrooms were cool under my bare feet. The bedrooms were empty, the beds unmade. As always, I paused in front of the fireplace over which hung a Rubens reproduction, an abduction scene of naked women, their heavily-jeweled arms raised in supplication.

There was a wardrobe in the bedroom that had been pulled out from the wall far enough so that I could squeeze behind it. From there, standing on my tiptoes, I could reach the empty socket of a wall lamp. I would stick the tip of my finger in the socket, and as the weak current pulsed through my hand, I wasn’t certain if I was experiencing pleasure or pain. The one thing I did know was that I must never tell my mother about my adventure, because whatever I was feeling, it was far too exiting to be allowed.

I stepped out onto the balcony and leaned back into the ivy that covered the entire house. On the far side of the garden, on the balcony of our neighbor’s house, the deck chair was empty. A stunningly beautiful young Czech woman often sunbathed naked in the deck chair, and if she happened to catch me watching her, she always nodded and smiled.

A fly landed on my arm, but before I could swat it, it flew off into the house, into the Chinese Room with its exotic tapestries, one entire wall devoted to a shock-red flag with a runic swastika in a circle of white at its center.

I stepped back into the hallway, and that’s when I saw them, next to the bathroom door, a pair of highly-polished jackboots. I knew then that my father had returned.

I glanced down the stairs before quietly opening the bathroom door. The first thing I saw were his clothes, heaped and tangled on the tile floor. And then I saw my father through the heavy steam, naked in a full tub of water, his head back against the rim of the tub, his eyes closed.

The expression on his face — it was as if he was about to cry. — Peter Halfar 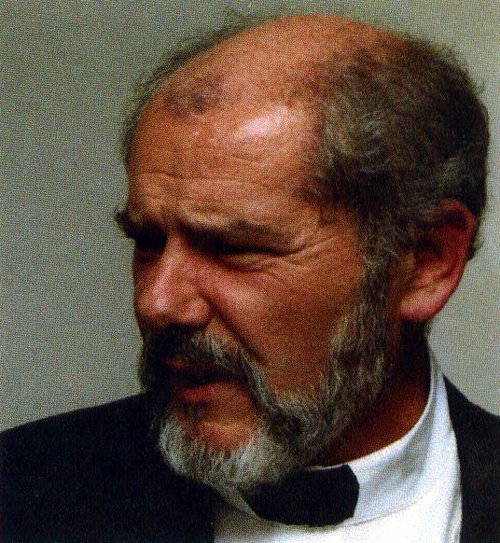 THE YEARS ON THE GREEN BANKS OF THE Isar have faded away, and I’ve become an old man. But the older I become, the better I paint and write, which for me is a necessity of survival.

I’m not an intellectual, and I don’t work from the gut. I wait for an impulse, and when it comes, it’s as if someone threw a pail of scalding water in my face, and I immediately begin writing or painting.

People who incessantly share their problems with me so that I may share their unhappiness are the raw material for my stories and paintings. That and my own difficulties, of which I have an abundance. I am, for example, tortured by chronic fear, and I delight in it!

But I am hungry for life and I strive for happiness, which isn’t always that easy to come by. — Peter Halfar 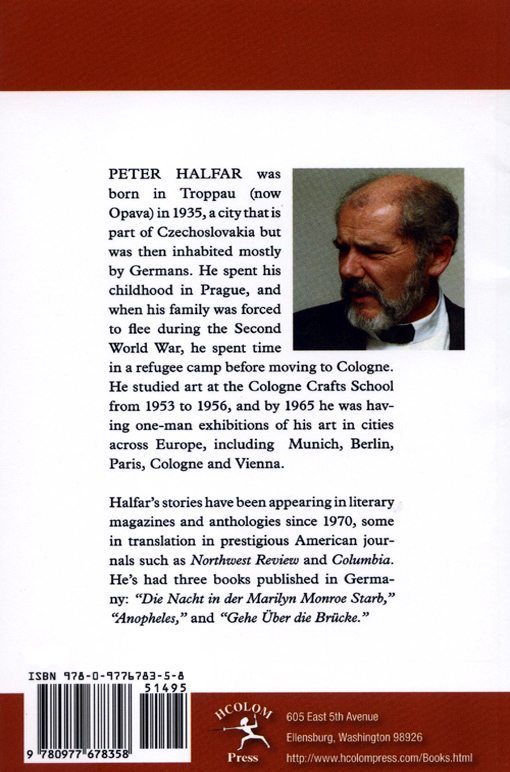