zero as the sum of existence 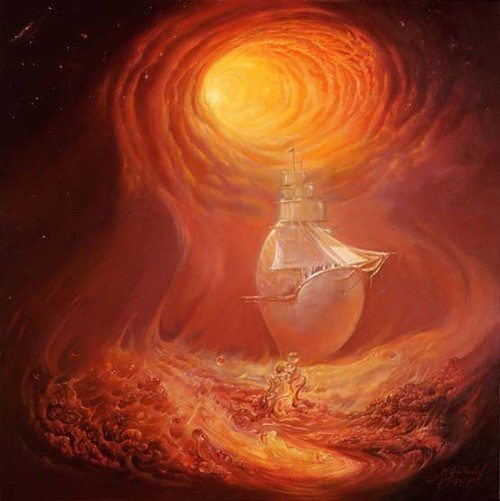 Zero as the Sum of Existence

You can’t have things that matter without things that don’t. Just ask Stephen Hawking. Look at it this way, Stephen says, here’s a flat piece of land, but you want a mountain, so you start digging and piling up the dirt, and if you keep at it one day you’ll have a mountain. But you’ve also got a pretty good sized hole. You can’t have the mountain without the hole, and the mountain and the hole cancel each other out, that is they add up to zero. They’re matter and anti-matter. The universe sprang out of nothingness.

I have a hard time wrapping my head around that. I still think in terms of the earth being flat with not just the solar system but the entire universe spinning around it, the mountain and the hole and the laws of physics, all of it spinning around a flat disk speckled with oceans full of sea monsters. And I have a hard time getting the guy with the shovel who dug the hole that made the mountain out of my head. Also, I can’t stop wondering about things like love and hate, can’t help feeling they warp the laws of physics, can’t help feeling that nothing comes out of something.

This is shaky ground to walk thru life on, riddled with high mountains and treacherous deep holes, with music and dissonance, dread and audacity, angels and short-order cooks. It makes it hard just getting thru the day, any day, the first day at the dawn of time or the last day of Armageddon, leave alone Friday the 13th in the month of June in the year 2014.

It was the end of a week peppered with disruption and surprise attacks, a week in which my mind kept playing tricks on me, and I was on the verge of throwing the shovel down and refusing to build any more mountains. Fuck the mountains and the holes, fuck Sisyphus rolling boulders uphill for all eternity. It was a week in which it sure didn’t look like everything was going to even out to zero, a week in which I was operating deep in the red, a week in which for every chip I chopped out of the tree of life, two grew back in its place. A week of working my fingers to the bone all day and burning the midnight oil all night trying to shape a collection of stories into a book, a week of deleting a barrage of hate emails from a deranged total stranger.

My state-of-mind is the only reality I’ve got, and I’m constantly reshaping it out of whatever nothingness throws my way. I manipulate the laws of physics to my advantage by the choices I make and the happenstance turned up by those choices. Like just an hour ago I chose to hit the drive-thru for a mocha and the barista laid a $50 gift certificate on me left by someone as unknown to me as the madman sending me hate mail. The barista had no idea who it was (not the madman, the guy who left the gift certificate), all she knew is he looked like he’d been camping and he said he likes my writing.

It’s not important that he likes my writing, what’s important is that thru my writing my reality is bleeding into his, and his reality is being drawn into mine by a gift certificate. Between us we’re shaping a new universe, and soon we’ll all be gods.

Tagged as John Bennett, Poetry, Zero as the Sum of Existence