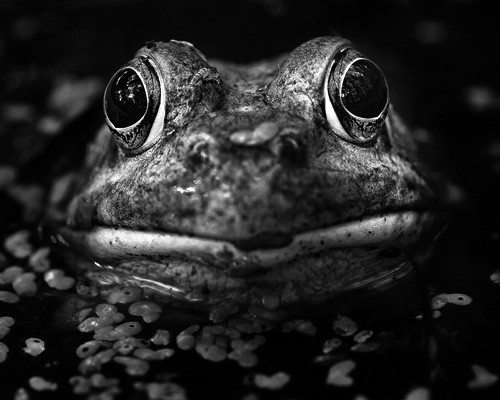 I had a dream that I was a fat toad on a lily pad and the lily pad sank straight to the bottom of the pond because the toad was made out of concrete. I ran the dream by the crew just as we were getting ready to do a heist — we’d already packed the van with weapons.

It was a big heist, we’d been planning it for months, and if it went according to plan we’d be set for life, all six of us, from the mastermind Gunther right down to Cisco the driver, and then I shot my mouth off about the dream, which made Alicia gasp. “Oh, fuck me!” she said.

Alicia was our clairvoyant, her mind was simple and in chaos most of the time except now and then she’d have these lucid moments and see loopholes in some plan that Gunther, with all his brilliance and meticulous planning, had cooked up, and it really pissed him off. But he’d have to abide by Alicia’s visions, because they were always spot on.

“Yeah, fuck you,” said Gunther. “And fuck him too, dreaming he’s a concrete toad.”

We didn’t waste a lot of time analyzing the concrete toad, we all knew what it meant. The heist was off.

Alicia and I went off on our own after that, we did a few small-town banks and eventually got nabbed, and that’s the last I ever saw of her.

Then, five years into a ten-year stretch, I started seeing the prison shrink, hoping I could work an early out, and I told him about the concrete toad dream. He went on and on with his analysis, growing more and more impressed with himself, and finally I cut him off and asked if he thought Alicia was right and we would have got nabbed if we’d tried to do the heist.

He said he didn’t see what the two had to do with each other, and that’s the last time I went to see him.