back when the country was young 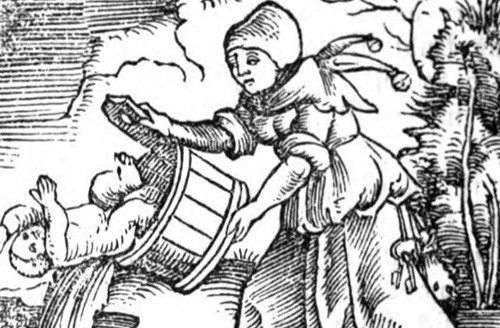 Back When the Country Was Young

“Don’t throw the baby out with the bathwater” is an idiom with a fairly obvious implied meaning, but apparently it actually happened in Europe as far back as the 1500s, and it’s happened in America.

Back at the turn of the 20th century, in impoverished large families, Saturday night was when everyone took a weekly bath, one after the other, in the same tub with the same water. Not a tub hooked up to hot-and-cold running water, a large tin tub that got filled with water heated on a wood stove in a five-gallon pail. Father first, then the oldest son, then a string of siblings of both sexes and finally mother and the baby, the mother weary from a hard week. And sometimes, while half submerged in the murky water, sometimes an emergency would arise in the house that only a mother could handle, and she’d climb from the tub, wrap a robe around herself, and rush off to attend to it. The baby, left behind, vanished under the dark gray water. By the time the mother realized what she’d done, it was too late. Two of her sons had dragged the tub out into the dark backyard, and swinging it by its handles – one-two-three! – emptied it, along with the baby, into the bushes.

Influenza and small pox were major causes of infant mortality back when the country was young, along with getting thrown out with the bathwater.

Tagged as Back When the Country Was Young, John Bennett, Poetry