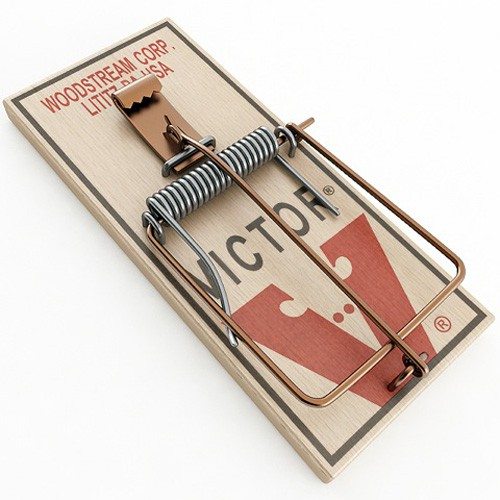 Getting thru winter can be an ordeal. Picking dead flies out of the mouse trap under the kitchen sink, for instance. It’s a gruesome sight, forty decapitated houseflies strewn across the pine wood of a Victor mouse trap. They must have lined up side-by-side, and then the heavier horsefly nose-dived into the spring-release and snap. I found the horsefly dead, face-down in the compost. The horsefly was the executioner, but they were suicides all of them, at their wits’ end from the frigid air, the depleted sunlight.

I was in my shorts, barefoot, staring down at the dead flies with a glass of water in my hand. I tossed off the water and went back to bed; lay on my back staring upside-down out the window at the moon thru the bare branches of the maple tree. The outside window thermometer in the kitchen read nine degrees Fahrenheit, the clock read 4:12 a.m.

I got out of bed again and turned the clock back an hour. When the alarm went off at 5 a.m. I set it back another hour. Now it would be light out when it was time to go to work. But while it was still dark, my help began banging on the door. They didn’t know about the time change.

“You’re early,” I called out from my bed, but they couldn’t hear me. I had to get up. I pulled the slats apart on the Venetian blind that hangs over the front-door glass. “Go home,” I said. “There’s been a time change.” I let the slats fall back in place and went back to bed.

But I still couldn’t sleep. I hadn’t slept since I brushed the forty dead flies into the trash. I began thinking I should have put them in the compost with the horsefly. But what would happen when spring came and cotyledons began pushing up thru the garden soil? Would there be a bad vibe on them because of the decapitated flies? I was on shaky ground when it came to saving the earth.

I put the clock back another two hours and my help began banging on the door again. When I didn’t answer they left. I heard them start up their cars and drive away. Who knows what they thought? Who knows what they did with the rest of their day? I decided to take the day off. I dressed in ski pants and my parker with the hood. I put a scarf over my mouth and nose. I put on my boots and gloves and trudged thru the snow to the nearest restaurant.

I ordered breakfast, but they told me they’d stopped serving breakfast hours ago, that it was almost dinner time. I said bring me anything, bring me the special, and while I was waiting for my food I took off my wristwatch and set it back four hours. I looked out the window and saw my reflection. It was dark outside, and a heavy snow was falling.

After I was thru eating I called a cab. On the way home I asked the driver what time it was. “Six o’clock, Mac,” he said.

He looked at me in his rearview mirror but didn’t answer. He dropped me off in front of my house and went fishtailing down the road.

I went inside and turned the heat up. I left the door open under the kitchen sink. I couldn’t go thru what I’d gone thru the night before with all those decapitated flies. I dumped the trash out on the floor and began sifting thru it in search of the flies. Each time I found one I picked it up with the tweezers from the medicine cabinet and dropped it in the compost with the horsefly. I’ll take my chances on what might happen come spring.

I went around to all the clocks in the house and set them back two hours. I was determined to get a good night’s sleep. I decided to take a hot bath, but when I turned on the hot water, nothing. The pipes had frozen while I was off eating breakfast or lunch or whatever I was eating in the restaurant. I broke out the blowtorch and crawled into the crawl space under the house. I went at it on the pipes and caught my gloves on fire. I dropped the blowtorch and beat my gloves against my parker until the fire went out. I was lying in the dark under the house on frozen ground, surrounded by frozen pipes, and I had no idea what time it was.

I was cold down to my bones, but after awhile I grew warmer. Maybe if I waited long enough the pipes would unfreeze by themselves and I could go in and take a warm bath. I closed my eyes and tried to imagine a warm bath.

I’ll make it. I have so far, winter after winter. I just have to keep moving forward and never look back.

Tagged as getting thru winter, John Bennett, Poetry