the threshold of fear 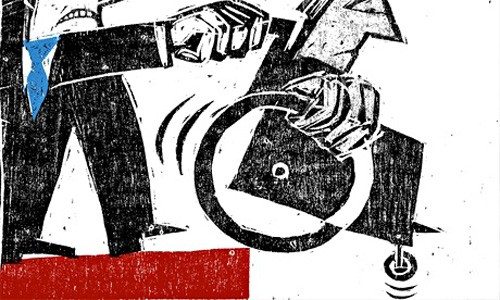 The Threshold of Fear

If I said that a physical cripple stands a good chance of becoming a mental cripple you’d probably say, “Yeah, that’s right,” just to get me off your back, but you’d be wrong. It’s possible though for a physical cripple to become an emotional cripple, but since you can’t tell one from the other I won’t try to explain.

Take the world by storm!

I’m talking here to the emotional and physical cripple. The mentally crippled don’t have the smarts to turn the tables on non-cripples. But be charitable toward them. They’re family.

Here’s the advantage physical and emotional cripples (the ones who haven’t buckled) have over non-cripples – they’ve gone beyond fear. And they did it by years of endurance and a lifetime of over-achievement. Quite often they’re artists, musicians and poets. Often business tycoons and world leaders.

Just look at the history of the Roosevelt clan. Afflicted with polio, acute asthma, clinical depression, alcoholism and inbreeding they generated warriors and statesmen (including two Presidents) and transformed the social fabric of an entire nation.

The only thing wrong with the word cripple is the definition non-cripples give it, non-cripples who never crossed the threshold of fear and came out the other side.

Tagged as John Bennett, Poetry, The Threshold of Fear