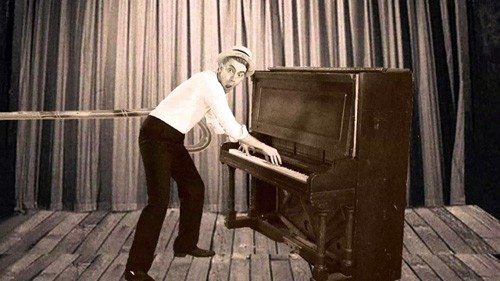 Angels are falling from the night sky. They make fluffy thumbs against the lawn when they roll off the tin roof, and one got lodged in the chimney. I had to hook it out with a Hoosier stick.

Years ago I started writing a Vaudeville novel, and I went out and bought a Hoosier stick – to get some idea what it felt like to get yanked off stage with one, and what it felt like to yank someone off stage. I had a wife back then, and I’d stand in the middle of the living room clowning around and she’d snake that thing out there, hook it around my neck, and yank. To see how it worked the other way around I went down to the local bar on Saturday night and practiced on loud drunks on bar stools. It didn’t go over well. I live in cattle country, and the locals don’t have much sympathy for a writer doing research. Then my wife left me and I went on a ten-year drunk and never finished the novel.

I’d totally forgot about the Hoosier stick until the night the angel got lodged in the chimney, but it came back to me in a flash that it was out in the garage. I rushed out there, stumbling over fallen angels on the way, climbed up on the roof and rescued the angel.

I’m sure by now other questions are arising in the minds of some readers. Some of you are beginning to think I’m making all this up. Some of you are probably doubting that I ever started writing a Vaudeville novel. But you should have seen that angel when I finally got him out of the chimney. He was covered in soot. I can’t say for sure, but this may be the first time an angel and a human came face-to-face. His eyes were a penetrating blue.

I carried him in my arms to the bathroom, slipped off his gown, and lowered him into a warm tub of water. I’m using “he” for convenience sake, but angels are without sex organs, which I discovered as I lowered him into the tub. They’re also nearly weightless, which accounts for the muffled sound they make when they hit the ground.

After I’d washed off the soot, I stood the angel on a bath mat and dried him with a Turkish towel. He obligingly spread his wings so I could do this, his feathers dripping water. Then I took the hair dryer some woman had left behind and dried his wings and gown. Next I put his gown on again, marveling at his soft translucent skin. Then, with a gentle flap of his wings, he floated into the living room and hovered by the front door. I opened the door, but before he flew out into the night, he kissed me on the forehead.

The next day I dug out the trunk with the pages of the uncompleted Vaudeville novel in it, thinking I’d have another go at it. But the magic was gone.