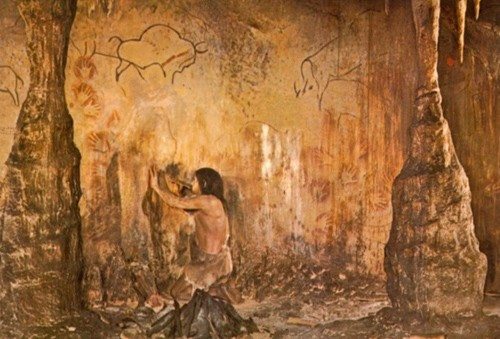 Living anachronisms are dangerous to progress. Living anachronisms, that sounds like a misnomer, a contradiction, but so what, that’s academic, irrelevant, let’s shit can the dictionary and ad-lib, let’s get down to the nitty-gritty, upturn the applecart, ridicule its wheels, let’s blow up some communication towers and go back, way back to where the first anachronisms lived, cave men in bear robes with clubs, 5′ 9” tall and weighing in at 280 pounds, Neanderthals stumbling across their first small band of humans, nimble and quick-witted with their dart guns and straw huts, making fire any damn time they felt like it, and — their women!

The Neanderthals are blown away by the women, and so they carry off a half dozen of them and back in the cave fuck their brains out all night long, at least that’s the way it seems the next morning when the women can’t think straight, they have never been fucked like that before, something has been lost in the evolutionary process.

Those were the days when living anachronisms ruled the ice caves, when they could bring down a mastodon with a club and in their own clumsy fashion prayed to the dark sky to send down fire.

They had no idea where this wave of the future was coming from, with their fire and their hut clusters, their hot women and dart guns, their cooked meat and their ambush warfare, no idea at all, and they could care less – they stayed clear of this puny lot and their clever ways except to steal their women. But they kept coming, wave after wave of them, setting a pattern that every true anachronism in today’s world recognizes.

Anachronisms, if you want to get metaphysical about it, are the keepers of the heart’s sacred fire, and when the last anachronism dies, our world will die with him.