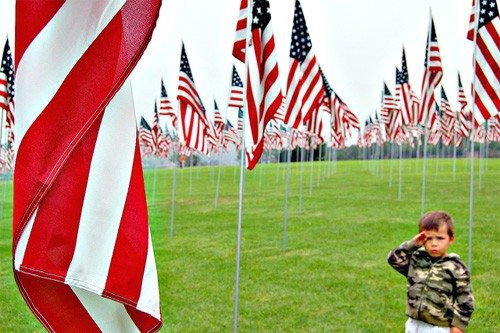 Gentlemen: your hair will turn gray no matter what, gray and brittle, looking more pathetic long than short, all the virility baked out of it, unless, of course, you get cancer young enough and then the chemo will cause it to fall out and your skin will turn gray.

But what’s this got to do with patriotism, you ask – the good old rhetorical question that allows us to hopscotch out of blind alleys and illogical conclusions, our heads, regardless of the condition of our hair, held high.

And there we are, heads held high, a sure sign of patriotism for all Americans, people who wage war on anything that moves including smokers, people who get cancer from a lifetime diet of carcinogenic junk food, a diet passed on to us by our forefathers, people with a history of lynching and getting lynched, who established their first national park back around 1872 over a volcanic subterranean lava pit the size of Delaware and Rhode Island combined, people who stand tall and salute the flag. Standing tall with your head held high, a sure sign of patriotism.

For example: a divorced woman who works two jobs and eats lunch at Burger King has two sons and a short-bed Ford pick-up, and welded dead-center in the bed of that pick-up is a metal flagpole that rises ten feet into the air. Each morning before breakfast this woman (let’s call her Sal) marches out into the driveway with her sons and stands at attention while the oldest son climbs onto the pick-up bed and the younger son hands up a flag, folded military fashion. The oldest son attaches the flag to a pulley rope and slowly raises it while the mother sings America the Beautiful and the younger son fires a double-barrel 12-gauge straight up in the air. The neighbors don’t complain, they’re patriots, they come out onto their porches, stand tall with their heads held high and salute. When it’s their turn to wage war, these boys will be ready.

But waging war isn’t what it used to be. It’s getting hard to find another nation full of people who are willing to stand tall with their heads held high and shoot back face-to-face. People who aren’t Americans tend to duck and dodge and hide behind things, they’ll shoot an American in the back. A lot of proud American boys are coming home from the latest wars with parts of their bodies blown off.

You think this has diminished our patriotism? Not a chance. It’s kicked it into fever pitch and has spawned a new industry, the prosthesis industry. Yessiree Bob, a boy back from a war nowadays can salute smartly with his high-tech prosthetic right arm, and when he does, sophisticated technology implanted in the prosthetic elbow plays the National Anthem.

We can handle anything they throw at us and turn a profit.