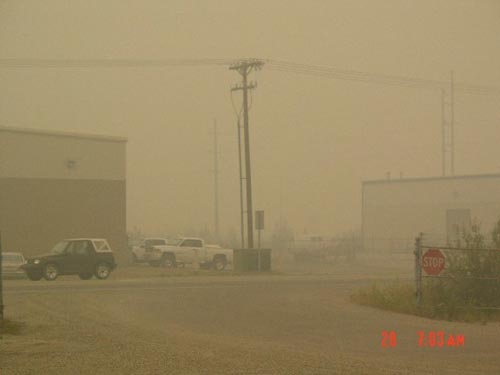 The smoke in the air is thick as soup from the wild fires that are eating up the state. From up on this hill there’s nothing to see, not the roll of farm land and prairie, not the foothills, and definitely not the mountains further back. I’m up here anyway, me and the punks that I’m giving a sliver of immortality by working them into some of my Shards.

They’re parked all over the place, barely leaving room for cars to get thru, half of them with their mufferless engines running, now and then gunning their motors and sending eruptions of black exhaust to merge into the fire smoke, the other half sitting on their hoods or in the beds of their pick-ups, yelling back and forth at each other, throwing empty cans and garbage over the low fence into the juniper.

I’m a few hundred yards further down than usual, out of the van, sitting at a picnic table in the middle of a wide expanse of grass, hoping no one will approach me. But someone does, one of those people who walk with ski poles, a skinny-as-a-rail man probably in his 60s, a blemished crab-red scalp with patches of brittle gray hair erupting out of it, wearing eye ware with lenses as thick as magnifying glasses; black Bermuda shorts and a winter sweat shirt, for God’s sake, with a Seahawk’s emblem on the front and a gigantic number 12 on the back.

I’m saved from standing up and screaming with my eyes shut and my hands over my ears by a hawk that swoops down over the trees, glides along swiftly not a foot off the ground, and then with one mighty beat of its wings shoots straight up into the smoke and vanishes!

The guy with the ski poles doesn’t even register the hawk. He stops about twenty feet from the picnic table with an idiotic smile on his face, revealing a mouthful of yellow teeth; he’s wheezing but manages to squeeze out in a slur, “You shouldn’t smoke, you know.”

I don’t answer. I put my pen down, lay my lit cigarette on the picnic table, and light another. I lay it down too and light two more, lay them down. Then I pick them up one after the other, take deep drags, and blow smoke into the smoke. He looks horrified.

“It’s people like you who are ruining life for the rest of us,” Ski Pole says, then shuffles around and waddles off in the direction he came from.

To put the finishing touches on a perfect day, I look over and see that a cop car has stopped behind my parked van. I gather my stuff and walk over there.

“Is this your van?” the cop wants to know.

It’s a road okay, the same road the punks are swarming over further up the hill. A one-way road with enough room on the far side of my van to let an 18-wheeler get by.

“Seems there’s plenty of room for cars to get by,” I say.

“Sir, you’re going to have to move your vehicle,” the cop says.

“This is not a laughing matter, sir,” he says.

I figure the cop is either physically afraid to deal with the punks up the hill, or that there’s someone among them with a parent who is part of the town’s power structure. I’m an easy alternative. The whole scene is a microcosm of society.