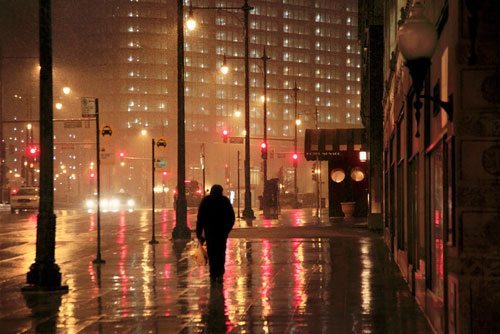 At a gathering of transvestites he whipped out a thick roll of $5 bills and began handing them out. Some took the money, bewildered. Some took it with a sneer. Others put both hands out in front of them as if to ward off danger. Others slapped the hand away in anger. One or two people said thanks. The sergeant-at-arms came over and with one hand on his shoulder walked him out the door. He wasn’t dressed for the occasion.

Outside on the street, sleet slanted down. A strong wind was up. March in Chicago.

He walked along the lake into a black part of town. He went into a blues joint. Pulled out the wad. People said, “Hey, man–what the fuck?” They said, “You better hang on to that shit, baby, you’re gonna need it where you’re going.” They said, “Get your narc ass outta here.”

Out on the street the sleet had stopped, but not the wind. He pulled up his collar and leaned into it. Every block or so he’d let a fiver sail into the night.

He walked into an alley and crouched down next to a dumpster. He pulled a cardboard box over him. He was free of the wind and could hear his own breathing. He was locked down in an awareness reserved for madmen and outcasts. Locked in there with him were the answers to every question worth asking.