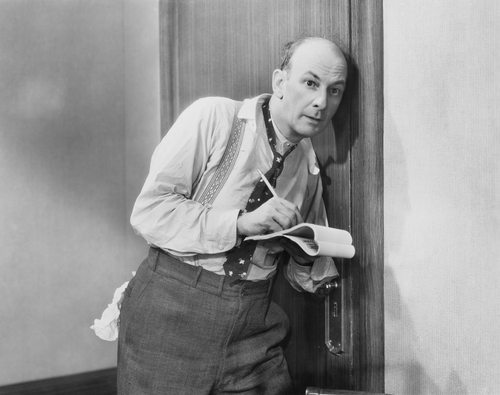 A twist and a turn and he’s out of the handcuffs, the leg restraints, the straitjacket, out of the rubber room, gliding down the dark hall like a shadow, his mind made up, he’s done with it, their fat pills and their bloated prognosis, their needles and mind probes, he’s going west where the buffalo roam, where the skies are not cloudy, where a man can come to terms with his future.

He won’t make the same mistake twice. He won’t answer the door and say, “Yes?”

What was he thinking, standing there in a dress with sagging nylons, draped in snakes, the house full of cats? He’d been at it so long he forgot there was anything outside the door.

Ears, ears were out there, a world of ears twitching and listening while he paced night and day conversing with spirits that were sometimes confrontational, and when they got that way he had to stand up to them, invent a new language and scream in their faces, let the spiders out of their jars, flush the toad out of its dark corner and exorcise it, turn the TV up loud.

The ears heard and passed it on to the fingers and the fingers dialed the number and the lips whispered: “Come get him.” And like a fool he opened the door.

But not again. Not this time. This time he’ll be ready for them.