three strokes on a yellow pad 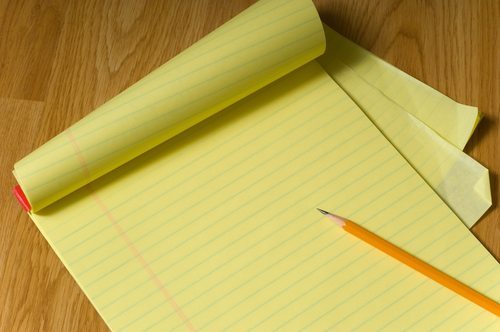 Three Strokes on a Yellow Pad

Years of boldly stroking three lines with a ballpoint across the top of a page on a yellow pad, up on the hill overlooking the valley after a day’s work, a cigarette between my lips, and then I’d launch into a frontal Shard attack on all things bogus. I feel invincible when I’m in that mode, feel like I’ll go out standing with a fist in the air.

And then, ten years ago, both my iliac arteries exploded, and I almost cashed in my chips. But, thanks to a crackerjack surgeon from India, I survived and went on the attack again.

But yesterday, another shot over the bow. I’m out with the crew doing windows, we’re working on the next-to-the-last house of the day, and I’m squeegeeing the inside of a large picture window and talking over my shoulder to the woman of the house about pets, dogs and cats and how sad it is when they die. I’m squeegeeing away, and then I begin to notice that my words are becoming slurred. I move on to the next pane of glass and attempt to put the check the lady just handed me into my wallet, but I’m having difficulty. When I finally do manage to get it in, I can’t bring my hand with the wallet in it back to my pocket. Not only that, but I’m leaning against the window frame and my right leg is bent at a strange angle. I continue trying to talk about dead pets, hoping the woman of the house will not notice my slurred speech and poor posture, and then I make a monumental effort to push myself away from the window, thinking that if I can achieve an upright position, everything will be fine. I go crashing to the floor, breaking my glasses in the process, and my work crew rushes over and hoists me onto a bench.

I can hear the house owner dialing 9-1-1, and with a monumental effort I manage to make it clear I do not want an ambulance–she actually hangs up. Then my speech clears, and I am able to stand.

I decide to take the rest of the day off. I carry my gear to the van and call the last house on the schedule. I walk back inside and my speech goes slurry again, my right leg numb. I slump down in a chair and slur directions to my work crew, but they are not responding, they’re staring at me with horrified looks on their faces.

Without consulting me, my crew decides that one of them should rush me to the hospital while the other two finish the job. I cannot get into the van, Mark has to lift me into the seat and belt me in.

We’re ten miles out in the country, and we drive back into town on back roads doing 80. On the way, my voice clears up again, and when we reach the hospital, I’m able to walk into the emergency room.

They kept me overnight, until this afternoon. They did a CAT scan and an MRI and other tests I don’t know the names of. They talked to me like I was retarded and debated sending me to Virginia Mason in Seattle. Instead they opted to stick me in a hospital room in some sort of high-tech bed bristling with gadgets that was designed for someone the size of a midget. All sorts of things were hanging off me and sticking out of me. I was a prisoner in the aftermath of a stroke in the third highest cause of death in America (being in a hospital), surrounded by cute nurses, the only upside to the whole experience.

We wash the windows at the hospital twice a year. They’re due again.

This stroke thing, almost a month ago now, did more damage than I at first realized, episodes of vertigo and subtle damage to the place where the writing comes from. Other than what I wrote above, written the day after the stroke, I have written nothing in almost a month. The Shards that I’ve been sending out to my email list are repeat send-outs from several years ago or Shards that I wrote prior to the stroke and never got around to sending out.

I don’t know where this leaves me. Perhaps I’ll start going up on the hill again and each day slash those three bold lines across the top of a page, do it until a spark ignites inspiration. Or maybe I’ll wind up with stacks of yellow pads with nothing on them but pages and pages of those three lines, a novelty that would probably draw more critical attention than anything I’ve ever written.

Meanwhile, I’ve been reading Tire Grabbers again for the fourth time since writing it, and each time, even tho I expect the opposite reaction, I’m struck with the certainty that it is not just a good book, it’s important, and I need to renew my efforts to draw attention to it. Perhaps I’ve been sending it to the wrong people. Maybe I need to send it to people like Stephen Hawking and Ray Kurzweil, send Hawking the audio version.

Whatever happens, if it gets to the point where I can no longer stroke in those three lines at the top of a yellow pad, please, someone pull the plug.

One Response to three strokes on a yellow pad