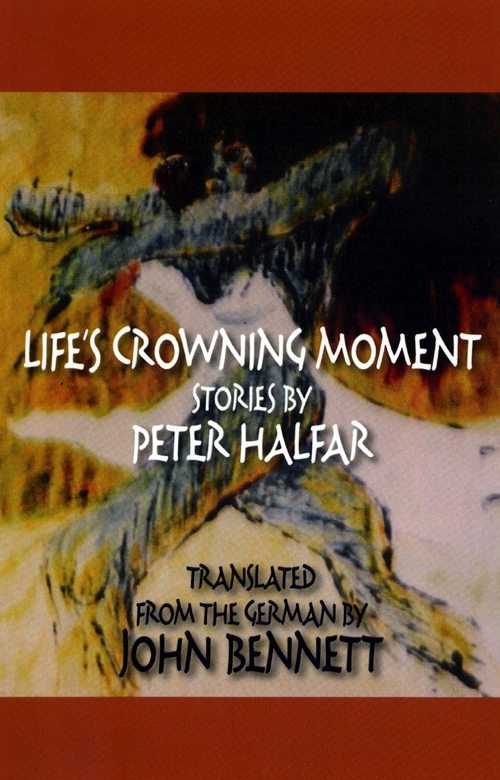 The story below can be found in the short story collection, Life’s Crowning Moment by Peter Halfar. If you are interested in purchasing this book, visit the Vagabond/Hcolom Press web site by clicking here… or just hit the book cover above.

(translated from the German by John Bennett)

When Helma couldn’t stand it at home any longer (her mother was a fat hateful creature with jaundiced eyes), she rented a room in a boarding house on the outskirts of town. It was a ground-floor room with dormer windows that opened onto a garden, a room where we made love on a chair which, because the room was without one, Helma borrowed each time from her landlady, explaining that her guest had nowhere to sit.

Our reason for making love on a chair was practical. We placed the chair against the door, which could not be locked, in the event the landlady decided to pay an unannounced visit. This impediment to her bursting in, we calculated, would allow us sufficient time to straighten our clothing and make ourselves presentable.
The landlady never did pay a visit, but it wasn’t long before she began refusing to lend us the chair.

Before Helma moved to her new place, we made love in my room in the apartment where I lived with my mother, or else on a bench in the park, hastily and under cover of darkness.

One spring afternoon, when Helma was wearing a beautiful white dress with black polka dots, we did it on the banks of the Rhine. She did it to me with her hand, and we had to keep an eye out in case someone happened along. But we both got carried away, and it wasn’t until too late that we noticed the boat on the river, a large touring boat with a live band, its decks crowded with people. I don’t know if the people on the boat could make out what Helma and I were doing, but they were laughing and whistling and waving in our direction.

Helma couldn’t come. Not at my place, not on the bench in the park, and not on the chair against the door. I thought I knew a way to help, but when I suggested it to her, she grew indignant.

The time came when the landlady went away for a weekend, and I was able to spend the night. Helma and I lay in the darkness after making love, listening to the ticking clock. We couldn’t sleep. Helma finally broke the silence with an urgent whisper.

“Did you hear something?” she said.

I held my breath for a long time and then let it out. “It’s the wind,” I said.

“It is not the wind,” said Helma. She put her arms around me and hugged me tight. “It’s coming closer!” she said.

I could feel her heart pounding against my chest.

“See what it is,” she whispered.

Hesitantly, I got out of bed and groped my way through the darkness to the window. I pulled the curtain back a little, and out in the garden, off in the distance, I saw a nebulous form behind the low branches of a fruit tree. “He’ll trample the roses,” I thought, and then I wondered what this man, for I was certain now that it was a man, was doing in the garden at such a late hour.

“Have you heard what happened?” my mother asked the moment I stepped through the door into the foyer of our apartment the next morning. It must have been a holiday, or else I would have been at work.

“What?” I said, taking off my coat. The television was louder than usual.

“It’s true. They found her in bed this morning. It must have happened during the night. The poor woman.”

I had seen all her films. Back then I was attracted to the sex goddesses on the silver screen. I went to the movies often, and almost always alone. For me, what transpired in the darkened theater was an intimate and private thing.

Helma and I worked in the same department store. She was a salesgirl, and I decorated the show windows. We never took the streetcar when we left work together, preferring to stroll through the city–arm-in-arm at first, then hand-in-hand, and toward the end, simply side-by-side.

Money was tight for Helma after she began renting her own room, and so she took on work as a cleaning woman in an office building on Monday and Thursday evenings.

One evening, as we were strolling past the Cologne Cathedral, she came to a sudden stop. “I totally forgot!” she said. “I have to go to work!”

“But today’s Friday,” I said, thinking she’d mixed up her days.

“I know,” she said. “But they’ve changed my schedule.”

I always walked her to the building in which she worked, waiting on the street below until I saw the fourth-floor lights come on. Helma knew I did this, but she never came to the window to wave down to me. She didn’t want to chance someone finding out what kind of work she’d had to resort to in order to make ends meet. But this night she wanted to go alone.

“Go on home,” she said. “I’ll come along when I’m through with work. And buy something for supper. Get some wine!”

I let her go and headed toward home, but I hadn’t gone far before I turned and began walking in the direction of the office building.

I stood for a long time looking up at the dark windows on the fourth floor, and then I crossed the street and began pushing the buttons next to the fourth-floor names. There was no response.

Later that evening Helma showed up at my door with a huge bouquet of chrysanthemums. “For your mother,” she said, her face flushed behind the white flowers.

I took her in my arms, and it was then I noticed a strange cat-like odor, something quite different from any of her other scents. We heard my mother coming down the hallway, and without speaking broke our embrace.

From that point on the changes taking place in Helma were impossible to ignore. She bleached her hair platinum and began dressing more elegantly. She even began wearing high heels, which made me more uneasy than anything else. Until now, Helma had been very unhappy about being so tall.

We began frequenting a little bar in the vicinity of the department store, after work and sometimes on lunch break. Helma was undauntedly gracious, but behind her smile lurked something I was reluctant to look at too closely.

In the meantime she rented another room, again with dormer windows, but this time on the top floor of a very old house, closer to the center of town and not too far from where I lived with my mother. There was no one to disturb us in the new place, but Helma still couldn’t come.

One Sunday morning while she was making breakfast in the kitchenette, I took a book from the top shelf of her bookcase, and as I leafed idly through the pages, a letter fell to the floor. This was not the first such letter I’d come across, and for some reason it made me think of the man who’d approached our table one day while we were having a drink in the little bar near work. He was tall and swarthy and he invited us to join him at his table.

“Just as long as you don’t spill your drink all over me!” he said to me, half jokingly. Then he began telling us about some trouble he was having with his wife, but before he got very far a woman in a mink coat came through the door, walked straight up to our table, and began pounding the man with her fists.

One night I found myself standing across the street from the house in which Helma lived. I stood in the shadows and for a long time stared up at her lighted window. I watched her open the window and lean out, looking up and down the street. Then she closed the window again and pulled the curtain.

A taxi with a single passenger turned down her street and drove slowly along the curb with its lights off. For a moment I thought it would stop, but the driver turned on his headlights and drove off.

I finally went home. My feet were frozen. I undressed in the dark and crawled under the covers. Shivering and full of anxiety, I pressed my ear to the cold wall and listened to the noises in the apartment next door, hot whispers, suppressed groans, the rhythmic squeaking of bed springs.

“Munich?” said the department-store manager. “A wonderful town, but what about your young lady? What’s going to happen to Fraulein Helma?”

“Do you realize how long a year is?” my mother asked. “What on earth are you thinking? Are you really leaving that girl here all alone? In a city like this? And still so young?”

My mother threw the dishtowel she’d been holding into the sink. It was rare that she grew angry. And then she began saying all the things that women say in such situations.

Helma didn’t answer. We were sitting on a bench in the park. The moon was high, white and cold.
I began to cry. “I can’t go on living like this,” I said “I can’t do it any longer.”
I walked her to the bus. She stood on the back platform as the bus drove away. I waved, but she did not wave back.

It was our last morning together, and I had to get up very early. Helma stood naked at the foot of the bed, her hair disheveled.

“Don’t leave,” she said. “Don’t go,” she repeated over and over while pressing a red cushion to her breasts.

My mother stood in her nightgown in the kitchen.

“Are you coming to the station?” I asked.

Her cheek was like ice when I kissed her goodbye.

I went down the stairs with my suitcase. The house door closed behind me. I put on my gloves.
The bus stop near our apartment was under construction, and I had to walk to the next stop at the traffic light on the corner. It had grown quite cold, and the snow on the ground was hard-packed and frozen.

I glanced back to the apartment window as I walked. It was still too dark to make out my mother’s features, but the further down the street I went, the further she leaned out the window, waving and waving as if she would never stop.

Filed under other publications, short stories