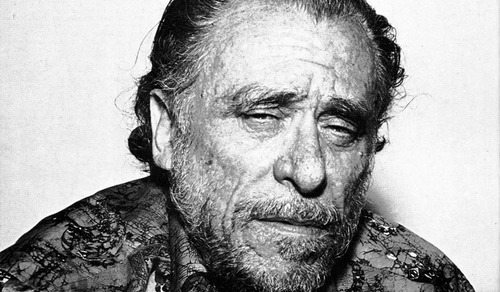 “If we could only get enough good men to walk together, but we won’t.”

That thought came to Bukowski a long time ago, probably in the early ’40s while he was curled up on a park bench with a Salvation Army overcoat pulled over him, a bench behind a library, maybe in Cleveland, Detroit or Omaha, a library filled with books about a fifth of which Bukowski had probably read, but none of which he’d written.

This was before Carl Weissner and the German connection, before John Martin and Black Sparrow Press, before color TV, cell phones and smart phones, before there was a computer in every home and soon after that a computer the size of a giant Hershey bar in every purse, pocket and backpack, long before cars became driverless, but by the time that happened there would be no place left to drive to anyway, no place to escape to, the on-the-road days would be a done deal, we would all be under surveillance and the Corporate Giant would rule everything from entertainment to government.

But back when Bukowski had this thought about good men walking together there were still people on the road, vanishing into thin air, hanging on like bulldogs to something that could not be pinned down with words; these people thought the world they moved thru would never be detected by the Corporate Giant, they did not see that the Corporate Giant didn’t need to detect their world, it simply kept blindly expanding and with an insatiable appetite consumed everything in its path, consumed nature, consumed childhood so that eventually the children born into the corporate world had their human values paved over with corporate values, with games and products, with compulsive consumption, all of which overrode parenthood.

Back then, when Bukowski had his thought, there were a handful of others who understood, who felt it in their gut, who saw the future that we are just now entering, a future beyond global warming in which it would no longer be possible to get enough good men to walk together, because by that time the Corporate Giant would be dictating all our wants and desires and leaving us to believe that those wants and desires originated with us.

Bukowski saw that before we got enough good men to walk together, the Corporate Giant would have stolen childhood, and dreams would go up in smoke.