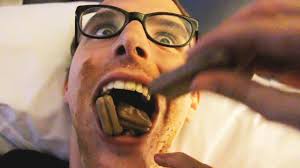 One minute he’s on top of the world, the next he’s caught up in the gears of some ill-tempered machine.

“It’s only mood swings,” his wife says, and tries to straighten his tie.

“Here, sit down and eat,” she says, taking the lid off a pot of steaming potatoes. When he looks away her lips begin to quiver. “It’s just potatoes!” she says, and rushes from the kitchen.

He goes about his business. He sweeps the leaves from the front porch and brings in the paper. He takes it into the garage and reads the headlines while sitting in the family car with the engine running and the windows up and a hose coming in from the exhausted pipe. He turns on the radio and honks the horn. He takes off his tie that his wife couldn’t straighten and makes a noose out of it. He slips it around his neck and ties the other end to the rearview mirror. He drops to the floorboard and the mirror snaps loose and gashes his forehead. He turns off the engine, gets out of the car, and goes back into the house.

“My God!” his wife cries. She rushes from the kitchen and returns quickly with a first-aid kit and a bottle of rubbing alcohol.

Their son comes thru the front door. He’s been sniffing glue with his friends. He sees his mother pouring alcohol over his father’s head where he sits slumped on a kitchen chair. He laughs hysterically, the son does. The alcohol fumes have super-charged his glue high.

“Go to your room!” his mother commands. “Immediately!”
Once in his room he drops his pants and makes a few new razor cuts on his thighs. Then he peeks thru the keyhole. His mother has swaddled his father’s entire head in bandage, leaving only a small hole for the mouth. She’s ladling in the potatoes, and his father is sitting up straight, his hands on his knees, taking it in.