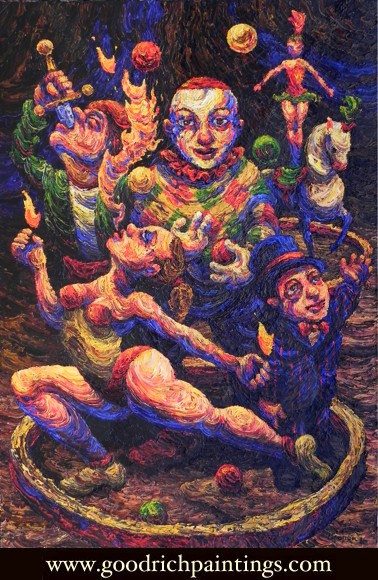 The break pushed the skin of his leg up into a circus tent. Inside the tent dwarf clowns scampered up the high ladder to the trapeze platform and formed a human pyramid. The ring master stood below in his patten-leather boots, silk top hat and Sergeant Pepper jacket with the shiny brass buttons, his hands on his narrow hips, yelling obscenities at them.

“Come down off there, you little fuckers!” he yelled. “Quit clowning around!”

That tickled their funny bone. The top dwarf on the pyramid laughed so hard he toppled head-first into the sawdust below, and the rest of the pyramid came undone. The bottom four dwarfs managed to remain on their hands and knees, but the top two followed the first into the sawdust, and the next three jumped onto the wire, tentative at first, but then gaining confidence until they were playing leap-frog with a grace that was new to them.

The four dwarfs left on the platform sat cross-legged, their faces serious behind their greasepaint grins, and the three dwarfs who had fallen looked up in awe.

The whole circus looked up, the lion tamer and the trick horseback rider, the juggler and the contortionist and the fire eater, even the trapeze artists, the Russian and the lovely young Gypsy girl.

They pumped enough Fentanyl into the I-V to knock out a circus elephant, and his eyes rolled back in his head.

The Pakistani surgeon snapped the two pieces of bone in his leg together again, and the tent collapsed.