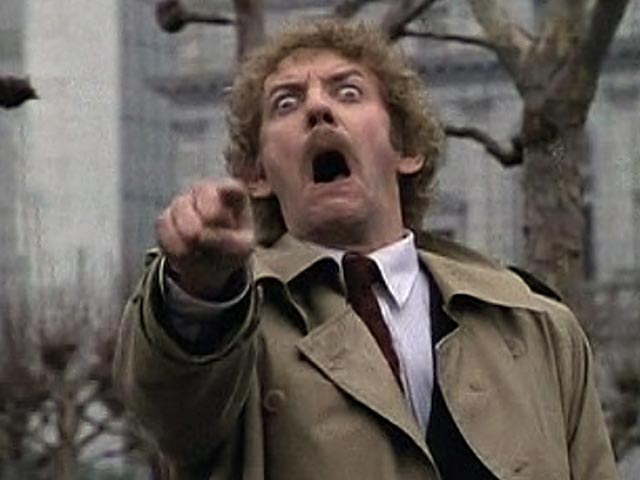 In essential ways, I disassociate myself from the world around me on a continuing and escalating scale. And inside me is a tiny entity that disassociates itself from me, not on a sliding scale, but absolutely. I sometimes wonder how it got there, if perhaps the world I disassociate from planted it at some opportune moment while I slept. This would imply that this world is not, at bottom, the diverse mass of overlapping conflicts it appears to be, but is (or is rapidly becoming) a single entity controlled by a single-minded, subliminal wish to achieve absolute uniformity.

Suddenly I have a flash insight into Jack Finney’s book, Invasion of the Body Snatchers, and the film versions the book has spawned every twenty years or so since its publication in the early 50s.

The premise for Body Snatchers is that aliens, in the form of giant pods which have been floating through space for light years, have drifted to earth, and while people sleep, these pods initiate a process of replicating them in every physical, mental and psychic detail–the only thing that doesn’t carry over are emotions. When the process is complete, the human prototype crumbles into dust and is disposed of by its alien replication, which then assumes the life of the person it has replaced. The replicas multiply exponentially and cannot be distinguished from humans except by random ultra-sensitive individuals who are taken for crazy if they sound the alarm.

The book, and at least one film adaptation, spins a happy ending, a triumph of fierce human emotions over the robot-like, advanced, emotionally flat-line intelligence of the pods; the other film versions make no such concession to improbable happy endings, and–given the dynamics of the replication phenomenon– ring truer.

I’ve been witnessing such a process taking place in human beings since I was a small child, but what triggers it is more subtle than seed pods drifting in from outer space; something essential is being leached from the core of the human spirit, not all at once as in the movies and the book, but evaporating slowly, generation after generation. We are not being taken over by an alien species with a preordained survival agenda, we are losing our essential humanity from the inside out through our own choices and actions.

The entity inside me that is not a part of me begins to look suspiciously like a giant pod.

I must never let it lull me to sleep.