golden buddha in a blade of grass 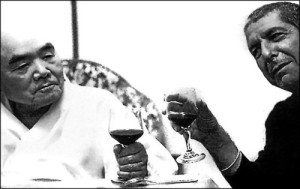 Golden Buddha in a Blade of Grass

I’m wading through Stranger Music, Leonard Cohen’s collected poems, written before his diamond-clean Book of Longing. The Death of a Lady’s Man section is particularly trying. So much bitterness anchored in shattered illusions of love.

And then Cohen’s Zen master pops up in one of his poems.

“Kone,” says Roshi, deep into a bottle of Courvoisier, “you should write cricket poem.”

It’s the summer of 1977, and they’re sitting in the dark in a cabin on Mt. Baldy with the door open to let the breeze in, listening to the crickets.

They sit in the darkness a while longer, and then Roshi says, “Kone, what is the source of this world?”

When Leonard can provide no answer, Roshi says, “Ah…difficult…” And then, in a soft voice: “Yah, Kone…you should write more sad.”

Then he rings a little bell and Leonard bows and leaves.

Tagged as Golden Buddha in a Blade of Grass, John Bennett, Poetry, shards