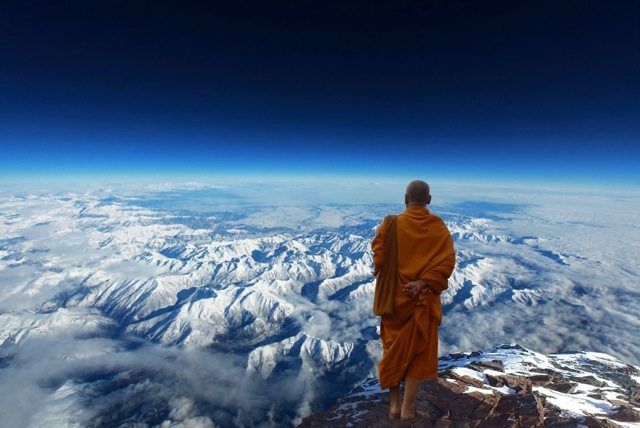 Until last night, the most powerful, prophetic dream I ever had was the dream of two heads, which I had in my early 40s.

Before that, in childhood, there were two recurring nightmares that were so devastating that I remember spending whole days in terror of the setting sun, of encroaching sleep. These nightmares were unflinchingly consistent, and they came back to back, one dovetailing into the other.

In the first nightmare, I am naked and tiny and trying desperately to outrun a towering wall of excrement as high as a skyscraper , rumbling toward me. Then, without transition, I am pinned naked to a vast expanse of rigid marble that extends to the pinpoint of perspective in all directions. This nightmare is devoid of everything except the great expanse of marble in a universe of colorless space. The force that has me pinned is a humming.

For no apparent reason, the nightmares stopped abruptly, along with the migraines that drove me into delirium on a regular basis. I was still young when this happened, perhaps 12.

From that point until I was in my mid-30s, dreams were just dreams, some good, some bad, most not remembered, and always in black and white. And then I had my first flying dream.

I’d climbed over the railing and was standing on a steel girder on the Oakland Bay Bridge. I was wearing what I normally wore back then — boots, old jeans, my tattered army fatigue jacket. My hair was in a ponytail, my beard full and black. I was staring calmly down at the water. There was no fear, no vertigo. And then I jumped and went straight down toward the water with my arms at my sides. Inches before I hit I pulled out of my dive and shot upward, my arms still at my sides. I rocketed through downtown San Francisco at alarming speed and with hawk-like precision skimmed the facades of tall buildings, circling and dodging and rolling. It was the only flying dream I’ve ever had.

I was deep into heavy drinking when I had the flying dream, and by the time I had the dream of two heads, I was lost in alcoholism.

I can still run the two-heads dream through my mind in vivid detail, as if it happened yesterday, although it occurred thirty-five years ago. I was naked and alone in the old house I lived in back then with my wife. The house was dark, the pale-gray darkness that comes just before sunrise. I was in a cramped closet where the water heater was situated. There was a machete leaning against the wall next to the water heater, and I picked it up. I had two identical heads, but this did not seem strange in the dream. Holding one head by the hair, I calmly sliced it off, setting it on the floor next to the heater. Then I took my second head by the hair, and with mounting apprehension, I sliced the machete cleanly through the neck. Immediately I dropped the machete and began pressing down on the head with both hands. I walked out of the closet, across the hallway, and into the bathroom. I stood before the mirror over the sink in that dim gray light, pressing down on my remaining head. Beads of blood stood out on the circumference of the cut. I stood there pressing down and looking into my eyes in the mirror, hoping desperately that if I continued to do this, the head would adhere back to my neck.

Last night’s dream pulled me out of sleep at three in the morning and brought me straight to my computer. Here is what I wrote:

This may well be the most significant dream I have ever had. Definitely unique in its setting and subject matter, and it is a dream in color.

I am in a mythological land with the feel of Tibet. I am a monk/ artist. I am me, but I do not look like me. It is as if I am a spirit, an awareness inhabiting this monk/artist who is in his 30s and wearing a black robe; dark hair in a ponytail, strong features, lean body.

I am an artist in a community that has a monastic feel to it, but there is also a material-world coexisting with this monastic world, and its patrols circulate through the monastic world. If the members of the monastic world maintain unwavering spiritual concentration, they are invisible to the patrols, but if in their minds they waver, they are immediately detected and taken away to be executed.

There is a sense that I have been a fugitive in my mind for quite some time, doubting the veracity of the monastic state and fearing the material-world patrols. Eventually they detect me.

While waiting for my fate to be decided, I am free to wander, and I come upon a work of art. It is a large clay replica of the community, situated in the main square. It is a work of exquisite craftsmanship, and as I behold it, I realize that someone has created it entirely from memory, and that not a single detail, inside or outside the ancient structures, has been omitted.

With this realization, the dream shifts. I am in a crowded city, still with an ancient feel to it. The city is worldly, and I am in a multi-leveled apartment building of sorts, more like a parking garage than an apartment building, all concrete, no privacy, huge gaping holes in the concrete like windows with no glass. The building is teeming with prostitutes; this is their home and their place of business. In this new context I am an innocent.

I remark that it is amazing that there are only women in the building, and everyone around me laughs good-naturedly at my naiveté. I am asked what I do for a living, and I tell them I am an artist. I am taken under the collective wing of the prostitutes.

The dream shifts again — in time, not location. Many years have gone by, and an emissary from the regime arrives at my new home that has now become something of a castle, and I its king. There are great halls filled with my art, and the art is infused with the expansive spirit of the prostitutes who took me under their wing.

I have not thought of my earlier life in the monastic community for many years. I am an old man now, gray and eccentric. The captain of the guard announces that he has been ordered to return me to the community, and I cackle and jump up on him like a monkey, wrapping my arms and legs around him. He tries to shake me off, but is not successful. He is exasperated and his men are amused. They are dressed like soldiers of ancient Rome.

And so off we go, back to the monastic community, the captain of the guard saddled with his awkward burden, which is me. There is a growing sense of threat as we move through the countryside away from the city. There are signs of carnage, the feel of purges and pogroms. For the first time in many years, I feel evil circling my spirit. But rather than fear, this fills me with alertness.

And then we are on the outskirts of the community, and a monk approaches us. He communicates with emphatic gestures that imprint their meaning into my mind. He is ancient yet full of young energy, and he is delighted to see me. I realize that in my exile I have attained a higher level of awareness, but the monk is further advanced than I am, which returns to me a sense of being a novice.

The captain of the guard (whom I dismounted when the monk came into view), indicates a spot 100 yards away, and the monk heads off in that direction, holding his robes up as he runs. He returns shortly with a pad of paper, and on it he rapidly draws with colored pencils a rendition of the clay replica of the community – nothing has been left out.

I realize that this is the artist who did the clay replica of the community years ago, and that I am the only one to whom his work has been visible. The images on the pad are his way of identifying himself to me.

In the dream, the community is called Dhammapada.

In tracing my way back to my childhood nightmares from last night’s dream, through the vivid terrain of the dream of two heads and the flying dream and the brambles and underbrush of so many lesser dreams, what I see is a dream map of the road that I’ve traveled. What I see is that there’s meaning in these dreams that is only now becoming clear to me. What I see is that the road has a destination. What I see is a lonely child tucked under the wing of an angel, a bhikshu in a Street Zen world.