don’t throw the babies out with the bath water 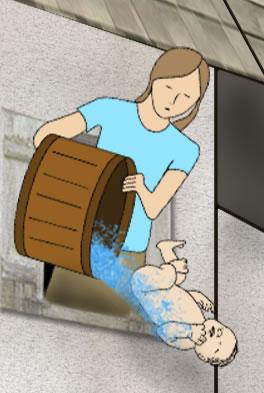 DON’T THROW THE BABIES OUT WITH THE BATH WATER

He wasn’t sure how the babies got in the bath water to begin with, but there they were, and they were getting thrown out left and right.

The floor was covered with water, and babies were everywhere. He carried a bag full of frayed blanket strips and was pulling a child’s red wagon piled high with shoe boxes. As he moved along he wrapped the babies in the blanket strips and put them in the boxes. Then he looked for crevices in the damp concrete walls to stick the boxes in. The crevices were narrow, so that often the boxes would fall out again, forcing him to backtrack to retrieve them. He began falling behind, and eventually he was wrapping babies that were beyond saving.

He had to choose–should he keep on with his mission of saving babies that had been thrown out with the bath water or should he try to locate whoever was throwing them out? But what would he do then? Grab the wrist of the offender about to discard another baby? Wrestle him to the ground? Call for help?

Eventually a solid wall of babies blocked him from going any further, and he began to question his motives.

Tagged as DON'T THROW THE BABIES OUT WITH THE BATH WATER, John Bennett, Poetry, shards