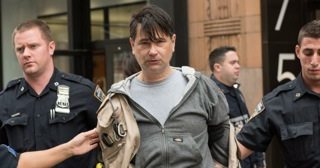 He printed the essay he’d just written and signed his name at the bottom. He was tired of being a nobody. He wanted to go places. The essay was titled “Essay.”

He took the essay into a bank and slid it across to the teller.

“What’s this?” said the teller. She wasn’t very friendly about it. She wanted to be somebody too.

He’d expected she’d give him the money, but she didn’t. She just stared at him.

“Make it twenties then,” he said.

“I can’t give you money for this,” said the teller. “This isn’t a library.” She knew that wasn’t right, but she couldn’t think what sort of place it was that the bank wasn’t. “This isn’t a hand-out center,” she said, and liked that better, even though she knew it still wasn’t right.

“I want to see the manager,” he said.

“Christine!” the teller called out, all the way across the bank to where Christine sat behind a mahogany desk.

Christine pushed her chair back and came across the bank in rapid little steps. “Is there a problem?” she said.

Christine and the teller exchanged glances.

“He wants money for this,” said the teller.

Christine leaned over the essay and frowned.

“Sir,” Christine said. “This isn’t a place where we exchange money for essays.”

The teller resented the hell out of Christine. Christine knew how to cut to the chase. It’s why she was bank manager.

“This has value,” he said

“Many things have value that aren’t worth money,” said Christine.

That stopped him dead in his tracks. When he spoke again, it was in a loud voice. “Give me the money!” he said.

Just then two policemen came into the bank.

A detective down at the station questioned him for over an hour and then turned him loose–he was harmless. The detective could read character, that’s why he was a detective. The cops on the beat resented the hell out of him.

He walked into the first bar he came to and slid the essay over to the bartender. “I’ll give you this essay for a beer,” he said.

The bartender studied him for a moment and then shrugged and poured a beer. Slid it over to him. The bartender could read character. That’s why he was a bartender.

He drank the beer in one go and slammed the glass down. “Another!” he said.

“Fine, but this one’s gonna cost you,” said the bartender, and gave the bar top a swipe with a white towel.