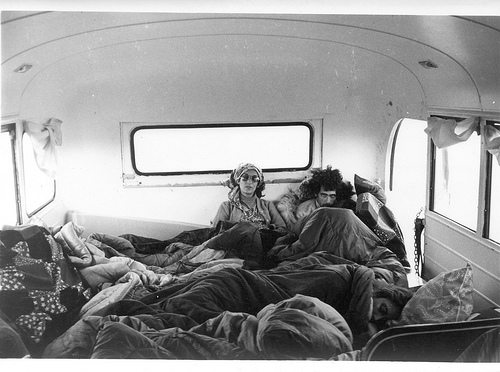 After three-thousand-five-hundred dollars in lawyer’s fees, the D.A. threw out the charges against his granddaughter.

For another twenty grand he could sue the sheriff’s department in some coastal high-tone southern California town, but he’s going to let it slide.

What concerns him is that she doesn’t get what it is she’s up against, and knowing that is essential to survival if you’re a free spirit on the roam in a Mad Hatter world.

There’s someone in his community running for office whose campaign poster reads: “Police! Animal Control! Safety!” That should be enough to make the hair stand up on the back of anyone’s neck, but when he told his granddaughter about it over the phone, she told him about driving her hippie van around a Santa Barbara Safeway parking lot with her side-kick Andy, stoned out of their heads and laughing their asses off as they gently bumped stray shopping carts and sent them rolling between parked cars.

“Choose your battles,” he told her, and she said, “What’s that supposed to mean?”