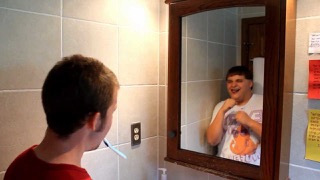 No sense of support. No sense of the end of things. No sense going back thru time to some misty day where the sun rose like a tulip. No sense of a trace being left.

Once the horn of plenty spills out over everything, there’s no telling the forest from the trees. Every Tuesday Jack Horner rides in on a pony and sounds the alarm, but his arrival goes unnoticed.

Don’t take it personal that the world passes you by. It’s only business. A chest full of medals and an annuity, and still the general goes down in obscurity.

There’s a reason why Bukowski is worshiped by skinheads. A reason he bet the nine horse his first time at the track. A reason his women save one were all lunatics. A reason he slipped through the crack into stardom without selling out. A reason but no explanation. Which makes him the second messiah, taking root like a mustard seed.

Jack Horner rides in blowing the news on a bugle, buck naked with his head cranked around backwards.

An aging postal clerk looks into a mirror and sees someone else’s reflection.

Somewhere someone turns a page and gets a three-second reprieve.

Somewhere else someone pours a glass of warm port while listening to Shostakovitch on a transistor radio. Angels will be there when the battery dies.

There’ll be no crucifixion.