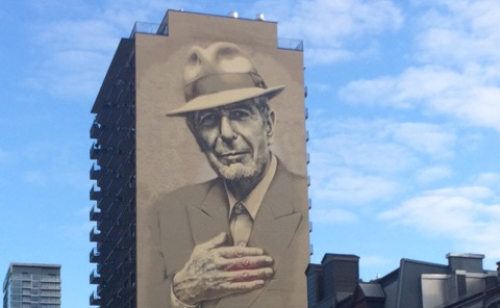 Hoping to make more friends, he bought twenty masks at bulk rate and went out the door wearing one and carrying the rest in a small suitcase. Two blocks down a cop car pulled to the curb and hit the siren once, enough to make him stop and turn.

Both cops got out and hoisted their pants by their belts that were weighted down with pistols, tear-gas canisters, billy clubs and tasers. They sauntered over to the faceman, pushing their caps back as they went.

“Out for a little walk are we?” asked one cop.

The faceman wasn’t sure how to answer, so he said nothing.

“Cat got your tongue?” asked the other cop.

He tried to remember which mask he’d put on before leaving the store so he’d know how to answer, but he couldn’t.

“Step over to the car, sir,” the first cop said.

Sir. Maybe he was wearing the retired professor mask.

He ducked in toward the squad car, hoping to catch a glimpse of himself in the side-view mirror, but one of the cops grabbed his arm and yanked him back. “Where do you think you’re going?” he said, and got him in a headlock.

“Okay, wise guy,” said the headlock cop, and wrestled him face-down on the sidewalk.

The headlock cop had a knee in the small of his back. He yanked his arms around behind him and cuffed him. “You have the right to remain silent,” he said.

“What’s in the suitcase?” said the other cop. He lifted the suitcase to the trunk of the squad car and was about to snap it open when the headlock cop said, “Hold it! What if there’s a bomb in there?”

The other cop backed away from the suitcase.

“Is there?” asked the headlock cop, pulling the faceman to his feet.

“What?” said the headlock cop.

A paddy wagon and an armored truck came wheeling around the corner with their sirens wailing. A ramp was lowered out of the back of the armored truck, and a bomb-squad technician in full body and head armor walked stiffly down it and over to the suitcase on the trunk of the squad car. He made a motion with his arm, and everyone backed away.

The suitcase proved harmless, and the bomb technician took off his headgear and wiped the sweat from his face with the back of a thick glove. Then he snapped the latches closed on the suitcase, and everyone jumped, including the faceman. The bomb technician laughed. “Pussies,” he said, and returned to the armored truck.

The headlock cop shoved the faceman into the back seat of the squad car and then walked back to the trunk and opened the suitcase. He found himself looking into the faces of the Pope of Rome, a gay Norwegian Olympic swimmer, Wayne Newton, a black rapper he knew by sight but whose name escaped him, and the mayor of New York City. “Jesus,” he said, and when he looked thru the rear window of the squad car, there was Leonard Cohen, smiling away.