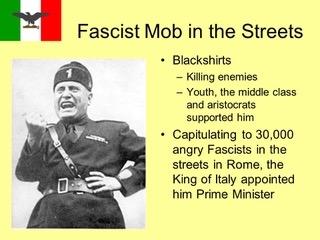 1) Live simply and get a minimum of 20 million of your countrymen to do likewise so that others may simply live. Take your idea of what “live simply” means and compare it with the idea of someone who is slowly dying of starvation in, say, Calcutta. Find a happy medium and use that as your guide.

2) Read everything you can get your hands on that tells you what fascism is. Then read everything you can get your hands on about how fascism is fast becoming the American Way. Then, hopefully, you’ll slowly become aware that although erudite men and women have clearly identified the stages of fascism and how the USA has already gone through most of those stages, none of them describes how to effectively nullify fascism before it has reach its final stage. Now turn off your TV and your computer and stop reading books. Concentrate on overcoming fear and use your head to do what’s needed.

Living simply and overcoming fear will lead you straight to an honesty that will trigger doing what’s needed without having to muck around with the rest of the two steps above.

To help you assess the gravity of the situation, here are two important things to know:

#1: Fascism is corporate in nature and in its advanced stages employs mob violence.

#2: The reason fascism has never been stopped once it reaches the stage it’s at now in the USA is that a large portion of the population (any population) is attracted to it and the rest lack the courage to stand up to it.

Tagged as John Bennett, Live Simply or How to Build a Better World in Two Easy Steps, Poetry, shards